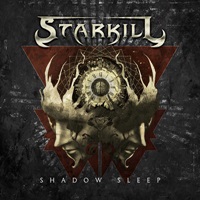 The third album from Starkill represents a little bit more of a stylistic shift beyond their noted melodic power/death metal propensities. Only natural it seems, as "Shadow Sleep" should be a record that takes the quartet from being more of a buzzworthy band into a flag bearer for where the genre is going. Keeping the songwriting more on point (none of the 13 tracks reach the five-minute mark) and cutting down on a lot of the overblown symphonic action for more of the straight ahead fueled riffs that have put Starkill on notice (Parker Jameson and fellow axe man Tony Keathley future superstars through their technical abilities and neo-classical nuances to their styles).

For those not in the know, imagine a mix of Arch Enemy and Children of Bodom, but with a Nevermore and Malmsteen slant in terms of many of the lead breaks, and that’s where Starkill reigns in their songwriting and aggressive performances. Air raid sirens open "Walk Through Fire", the keyboard riff and churning guitars leading down visions of CoB – Parker shifting between a discernible growl and a chorus that rivals what is heard from All That Remains Phil Labonte during his clean sections. There’s no deny plenty of jam dropping instrumental sections where dazzling displays of arpeggio runs and shred gymnastics take ahold – "Burn Your World" and "Into the Grey" two cuts to investigate and study in this regard.

Overall, you get the feeling that Starkill wanted to cut down all the excess and get to more of the meat and potatoes approach in their arrangements – verse/ chorus structures that are easier to digest while still containing the right fiery musicianship, and more of a clean prevalence in the vocals that could see Starkill crossover to a wider audience. The pummeling "No Savior" goes for the jugular through its strong rhythmic backbone and spacious, ethereal chorus that may take some people into Devin Townsend-land. In the end, "Shadow Sleep" could catapult Starkill to headliner ranks – as long as the early followers don’t defect due to the semi-whiny clean passages that Parker uses from time to time. Guitar maniacs in the power/melodic death field will dig this release the most.