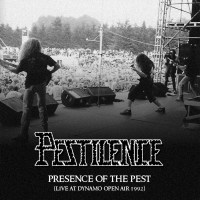 PESTILENCE – Presence of the Pest

A live album from the Dynamo Open Air performance in 1992, Pestilence reaches back into the archives for "Presence of the Pest". No one can deny the band’s impact on the scene, moving from a more thrash oriented sound to being very progressive and death/jazz fusion oriented and back to a more controlled thrash/death sound as of late. We get 13 songs and almost one hour of tracks, including a lot of early favorites such as "Chemo Therapy", "Chronic Infection", and "Suspended Animation" – as well as a healthy selection from "Testimony of the Ancients" record like "Presence of the Dead", "Lost Souls", and "Prophetic Revelations".

As far as the sound quality, it’s more of a raw soundboard affair – you can certainly hear everything on display, but it tends to favor more of the vocals and guitars with the bass fighting for sonic existence. Guitarist Patrick Mameli had that semi-Death spitfire growl down pat, while the music had a flair for the progressive texture amidst all the heads down power and speed. Playing in front of a home court advantage in the Netherlands, it’s understandable that a lot of the stage patter to introduce songs or acknowledge the crowd is in Dutch – but you can tell immediately that Pestilence gives their all to translate these studio cuts with the appropriate fiery passion and blitzkrieg mania that is necessary in all of the best live metal performances.

"Presence of the Pest" is a nice document of Pestilence in 1992, but probably will be most valuable to the collectors over the casual followers of the group.