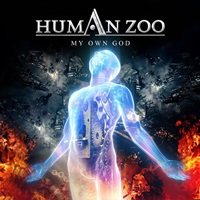 HUMAN ZOO – My Own God

A German melodic hard rock band that isn’t afraid to inject not only keyboards in the mix, but also saxophone on their latest album "My Own God". Their fourth album and first in five years, these 11 songs give off an energetic, positive vibe that resonates with Swiss band Gotthard, although the big vocal harmonies have more in common with say Loverboy or Def Leppard.

Guitarist Ingolf Engler plays with vitality and bluesy-oriented classic power, delivering some heads down chords that bring people out of their seats for "Love Train". Piano and saxophone work from Zarko Mestrovic and Boris Matakovic have a prominent role in more of a ballad format for the follow up "A Day to Remember", adding a Kenny G-oriented jazz flair to separate Human Zoo from the norm. Thomas Seeburger as a vocalist may not necessarily be considered in the upper echelon of the melodic hard rock singers, but his confident switching of lower to higher registers and German accented aggression makes "NSA" one of the more interesting songs on the record. The punchy drums set up swinging grooves, the second half of the record just as intoxicating as the first with hot tracks like "4U" and the Sunset Strip-ish "Solitaire" ready for the stage. Ending the record on an acoustic note with "Remind Me Of You" that includes female lead vocal tradeoffs, Human Zoo push all the right buttons to establish themselves as seasoned veterans of this genre.

"Eyes of a Stranger" back in 2011 underwhelmed because of a stronger vocal performance over average songwriting and hooks. "My Own God" showcases a sextet righting the ship, and as such this is ideal for all melodic hard rock followers.