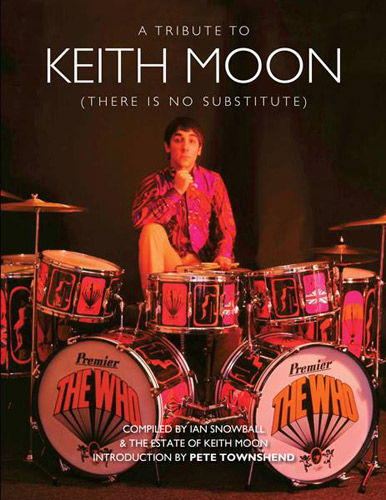 I was lucky enough to receive a promotional copy of this remarkable book on legendary drummer Keith Moon (The Who), and I must admit that I simply could not put it down once I started reading it. Appropriately entitled "A Tribute to Keith Moon (There is No Substitute)", this is not only a compelling and captivating account of what made Moon such an iconic drummer and musician, but also a fascinating portrayal of a man who inspired and influenced countless other musicians and fans all over the globe.

Compiled by Ian Snowball (and authorized by the Estate of Keith Moon and Keith’s daughter, Amanda De Wolf), this awesome piece of literature contains recollections and contributions from friends and family, band members and roadies, fans and devotees, and so on and so forth. All of them center on how important Moon was and is to them, albeit from different angles and for different reasons. Some knew Moon personally while others grew up listening to The Who, just to list a couple of examples, but they were all inspired or moved by him in one or more ways. The brilliant thing about the book is that it offers an intimate glimpse of who Moon was, but at the same time, it also provides one with a wide perspective on and understanding of how important Moon was to rock ‘n’ roll in general and how much of an impact he truly had on others. When it came to Moon, there was a method to the madness, if you will. In addition, I cannot even begin to describe how cool it is to read a book that focuses on Moon’s exceptional musical talent as opposed to all the sensationalist bullshit stories involving swimming pools and Rolls Royce cars not to mention cherry bombs and hotel room toilets. If you are interested in reading about his self-destructive lifestyle or crazy behavior, you should look elsewhere.

There were quite a few recollections that I found deeply moving, especially the ones that revealed just how generous, friendly, and intuitive Moon could be. I also loved the ones in which fellow musicians and fans elaborated on how Moon inspired them to take up the drums and turn their passion into a lifestyle. If I had to choose, I would say that the contributions from Kenney Jones (Small Faces, Faces, and The Who), Mick Avory (The Kinks), Carl Palmer (ELP), Richard Cole (the Who roadie and Led Zeppelin tour manager), and his old bandmate Pete Townsend (The Who), were the most thrilling and touching ones to read. On the other hand, there were a few weird entries toward the end of the book featuring so-called lifelong fans (who are only 14-15 years old!) describing how Moon and The Who changed their lives and pulled them out of depression and so on, but they add nothing to the overall story and perspective of the book. Luckily, there are only a few of those, so it is no biggie, to put it like that.

Did I mention that this tribute is filled with great photos, some of which are previously unseen? Well, it is. Some of those photos reveal a lot about the great man, which is to say that many of them underline and emphasize what is stated in the different essays. Heck, the book is well worth getting for the photographs alone – it is a photographic treasure trove, in other words. Simply stunning!

"A Tribute to Keith Moon (There is No Substitute)" is an excellent and most fitting tribute to an innovative and unique musician who completely changed and revolutionized modern drumming. He inspired and influenced legions of aspiring drummers and fans, and I have come across many hard rock and heavy metal drummers who cite him as a major influence on them. In many ways, that is what Moon ought to be remembered for. This book is the real deal, and the title says it all; there is no substitute for Keith Moon!