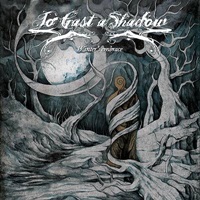 TO CAST A SHADOW – Winter’s Embrace

There’s something blissful about the marriage of gothic and doom when it comes to metal music. Especially if it’s handled in the right way – as Norway band To Cast a Shadow portray on their third full-length "Winter’s Embrace". Launching in 2004, the quartet possess one of those dark, melancholic sounds where the guitars churn against a mid-tempo to slightly slower template, the vocals cascading in an alternative, semi-gothic universe.

The simplicity of particular guitar sequences build tension and expand the horizons for different interplay combinations – "Bereft" for instance giving the listener dual clean/electric guitar combinations that echo against the haunting melodies, almost in a Paradise Lost / Tool montage. When the band choose to pick up the pace, the cultural riffs give an epic such as "When Death Comes" more of a Thin Lizzy kick, if taken to a heavier, doom plateau – the triplet chugs and Primordial-like atmosphere during the instrumental sections aurally delightful. Choosing to let closing notes reverberate in the air, narrative elements that add to the lyrical content, and supplementary keyboards that never overtake the normal instrumentation – Winter’s Embrace have a lot of love for the early 90’s doom and gothic movements, to the point that I wouldn’t be surprised if My Dying Bride, Tiamat, and the aforementioned Paradise Lost factored heavily into their preferred band listening sessions.

Nils Stenmyren as a guitarist/ vocalist may not necessarily be the most captivating voice that rises above the norm – he’s more content to be an emotional catalyst riding side to side with the music, taking "Seven Days" and "Devil’s Hand" where they need to be in the flow of the record. Imagine a singer in the alt/modern rock vein like Fuel or Shinedown that occasionally incorporates a lower growl to heavier passages and that’s what you’ll get – which could polarize certain people, but the combination works out effectively for the most part.

In the end, "Winter’s Embrace" digs deep into the gothic rock meets doom metal platform, and comes away appeasing in its atmospheric endeavors.