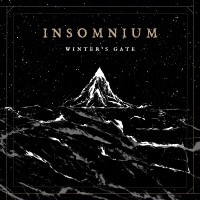 As far as I’m concerned, Insomnium never released anything that could even remotely be considered crap, although some albums were stronger than others, with a few masterpieces such as "Above The Weeping World" or my favorite album "Across the Dark". On these albums and the subsequent "One for Sorrow" as well as "Shadows of the Dying Sun" every fan will have their favorites, but I count "The Last Statement", "Black Heart Rebellion", "Song of the Blackest Bird" and my favorite Insomnium song ever, the Dark Tranquillitarian "Into The Woods" amongst their greatest compositions. The melodies in these tracks never get old and I can listen to these songs over and over again and not get bored.

Getting ready for this new album to hit my dropbox I listened to "Into The Woods" recently and once again marveled at its coherence, harmony and beauty thinking that I missed the way Insomnium used to make me feel as though they were touching the very flesh of my heart with their music. While "One for Sorrow" was great, "Shadows" slightly disappointed me as it didn’t seem to have that touching quality consistently throughout whereas they were just mostly writing good songs. The lyrics were still second to none but the music was becoming a little familiar, too comfortable, too safe like Dark Tranquillity on "We Are the Void". It no longer left me a mess. I realize they didn’t want to release the same album over and over again and that once you make three albums it is very hard to continue to evolve and showcase a different face every time and they still managed to do that for 6 albums straight but listening to "Into the Woods" I wished they went back to what made them unique in the first place.

Well, Insomnium must have sensed all that because "Winter’s Gate" is not only an answer to my hopes, has that Opethian "The Last Statement" progression, the sprawling songwriting of "Song of the Blackest Bird", the sweetness and melancholy touching my heart of "Into the Woods" and the black metal fury of "Black Heart Rebellion" but is simply their most mature, evolved and accomplished work to date. Inspired by Edge of Sanity’s 90s classic "Crimson" and possibly Moonsorrow, this 40:02 minute track of an album shows facets of the Finnish masters previously either only hinted at or not even present until now, whether we’re talking progressive rock (13:30, 33:28), Opethian acoustics, light-and-dark dynamics and melodicism reminiscent of "Still Life" or "Blackwater Park", an absolute first with gargantuan riffs that sound like an iron gate of a gigantic castle but recall Belphegor (16:08), or total black metal assault, so raw and almost dissonant early 90s Emperor-meets-Dimmu Borgir/Dissection (34:50) that wraps it up for a delicate piano ending, it’s all there never straying too far from and always encased in, that trademark Insomnium feel that can and does make a grown man cry like a beaver. And soon enough, too, for already the opening minute of the album-song quotes "Into The Woods", tearing me apart . When is the last time you got exactly what you hoped for?

Insomnium blew me away with this album. Again, I have a perfect album to forget the fake and plastic American world outside where feelings no longer matter and everything is for sale or can be manufactured, even regret, where nothing is everything and everything is nothing, to quote the late Chuck Schuldiner ("Nothing Is Everything", Individual Thought Patterns, Relapse 1993), and that I miss Europe. I can put on my headphones and sink deep into a soundtrack for this magnificent Scandinavian tale of greed, evil and redemption that costs you everything though you choose compassion over gold. It makes me feel like not all is lost and all things are possible to the one who believes. As for Insomnium, their way is perfect.