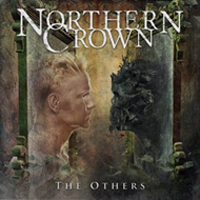 NORTHERN CROWN – The Others

‘The Others’ is billed as ‘epic doom’ and it certainly starts out that way. Right from the start fans will be reminded of all their favourites from the genre – Candlemass springs straight to mind. And for the first two tracks, most of you will be thinking – ‘Hang on! Here’s a contender for doom metal album of the year’. This is loud and proud epic doom that is up there with the best of them.

But then something strange happens in the form of track three ‘No One came to Mourn Me.’ Gloomy synths overlay a tinny programmed drum beat for this strange 80’s but not 80’s style number. On the first listen I thought this was an intro and waited for the track to get off the ground – but after 6 minutes as the tracked limped off to die, I realised this was just one of those aberrant experiments that should never have been let down from the attic. But that is fine – bands are allowed to try things out and some people might not mind it too much. It isn’t dreadful after all, it just breaks the spell. Then comes track 4, ‘Apostate’. This clocks in at 8 minutes, the first 3 of which are acoustic build-up and the last 5 of which are an underwhelming attempt to return to the form of the first couple of tracks. After the previous 9 minutes or so, this just breaks this record for me. The 4 minute filler ‘Pox Upon Your House’ does little to offend in isolation, but at this stage, when Northern Crown have totally lost my interest and wasted the last 15 minutes of my time this is just another step too far away from where they need to be. Up last is 11 minute close ‘Les Autres.’ Not a bad track (and some parts of it are rocking) but by now I just want to delete this album.

And so we go from contending doomster of the year to one of the lowest scores I have given for ET. I have no idea what Northern Crown were trying to achieve here and I don’t usually say this kind of thing, but they would have been so much better off keeping to the middle of the road. There is enough here for a pretty fantastic EP, but there is no way I could recommend this in its present form.

FAIR WARNING – Pimp Your Past

VULTURES VENGEANCE – Where the Time Dwelt In EP