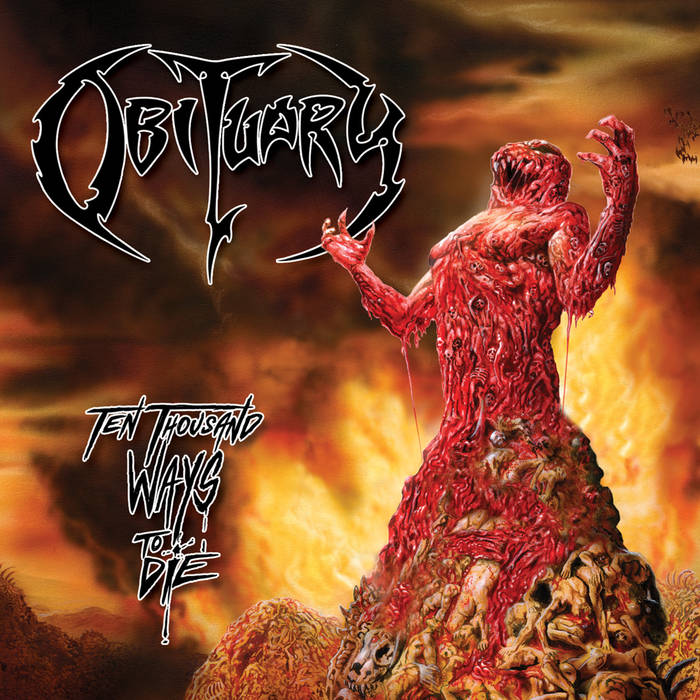 The legendary death mongers that we all know and love as Obituary are about to unearth this live album of theirs entitled "Ten Thousand Ways to Die". Actually, it has been referred to as a two-track single containing 11 live cuts as a bonus. To me, it feels more natural to refer to this as a live album containing two brand new studio tracks as a bonus…but maybe that is just me.

Given that I am a sucker for live albums that manage to capture a band in all its raw and honest glory, you can bet that large and ugly ass of yours that I dig this album. By now, Obituary have very little left to prove if anything at all. They have released a bunch of classic death metal albums, and these past few years have seen the release of all-out solid and entertaining discs such as "Inked in Blood" (2014) and "Darkest Day" (2009). In other words, they are still going strong. While one could argue that a live album by this band is hardly essential as such, it is invigorating and inspiring to hear a band that has existed for nearly thirty years sound so energetic and mean on stage. Nothing on the album sounds touched up or ironed out. It all sounds and feels honest, and I love the fact that the album captures such an "unrefined" spirit, for lack of a better word.

As I mentioned earlier on, "Ten Thousand Ways to Die" boasts the addition of two brand new studio tracks, namely "Loathe" and the title track. The former is a slow, creepy, and catchy tune while the latter is a groovy track that is neither as entertaining nor memorable as "Loathe", but still cool.

This release ought to appeal to fans of the band, but even if you are a newcomer to Obituary, this album could actually serve as a pretty good introduction to the band in that they cover the most essential and important chapters of their discography. The live renditions of songs off "Inked in Blood" are also a most welcome addition to the Obituary collection, I might add.