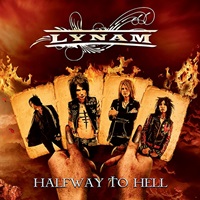 Together since 2001, Lynam from Alabama have been a part of the retro-metal / hard rock movement that aligns well with the 80’s scene. "Halfway to Hell" is the latest release, a first for European audiences as it contains the previous EP of the same name plus many singles and highlights from their earlier albums. Much like a lot of the Scandinavian sleaze/ glam brigade, most of these songs have a strong focus on immediacy in terms of the musical or vocal hooks – getting to the chorus rather quick and slamming those 4/4 grooves home.

Sometimes the shorter songs like "Rise Up" and "Store Bought Halo" give off a Crazy Lixx meets Mötley Crüe effect, the larger than life background choruses and energy level set to assault the senses in that primal contact mode. Vocalist Jacob Bunton (also with Adler and on the latest Gus G solo album) has that deep, rich made for radio voice, carrying home the slick harmonies for "Wrong Side of the Grave" while dialing back for tenderness on the acoustic-oriented ballad "Just Say Anything" that gives off a lot of older Beatles meets E’nuff Znuff qualities. These 11 songs bring me back to my teenage years when this music reigned supreme over the major media outlets – platinum albums, sold out arena tours, and videos abound where you couldn’t get enough of acts like Def Leppard, Bon Jovi, Poison, on through to your Warrant, Firehouse, and Winger brigades. The solos have a mix of that shredding chops with subtle twists, the production is lively and you get the feeling that Lynam would be at home in bars, clubs, or larger arenas/ festivals just the same.

Even when the band decide to go in more of a Shinedown / Alter Bridge-oriented commercial direction for "Save My Soul", there’s added depth in terms of some of the higher melodies and infectious chord progression shifts from clean to heavy that make this another highlight. "Halfway to Hell" should get some buzz going in Europe for Lynam for certain.