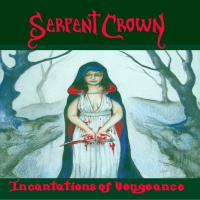 Serpent Crown is a thrashy sludgy doom band, but I hear plenty of punk and crust, too, on "Incantations of Vengeance". The album is more like an ep as it is shorter than Slayer’s "Reign in Blood" (Def Jam Recordings, 1986), 6 tracks clocking in at 27:15. The material is explosive and technical but has that familiar sludgy vibe to it that may appeal to regular fans of sludge doom genre. The power of the opener "Uncertain Life Certain Death", much lauded in the promo makes the hype right. Serpent Crown sounds huge, abrasive and rebellious, as the Mastodonian riff turns into a crusty punk anthem on fragility of human existence. Dara Santhai’s vocals recall both Zach de La Rocha and Karyn Crisis. The Mastodon influence is also heard on the follow-up "Conjurings of the Dead", more doom and sludge than thrash where the gender of the vocalist is instantly recognizable while she’s just as vicious and relentless. Dara also handles all guitars and plays all the solos which are impressively complex as the rhythm guitars are simple while not simplistic.

"Vengeance of the Witch" opens up with a riff similar to Unearth’s "Glorious Nightmare" ("III – In The Eyes of Fire", Metal Blade, 2006) but not enough to be the same, as the section Woz (drums) and Tommy (bass) audibly supports the weight of the then Mastodonian riff which turns into album’s first thrash track, and Dara’s vocals really shine on this one as you can clearly make out the lyrics (feel the vengeance of the witch!) as Dara graces the track with another great, if short, solo. The Mastodonian openings happen to be standard and sometimes they don’t give way to faster thrashy parts but pure sludge (Martyr), or full on doom (Bloodmoon) while the solos are always interesting and fast. Speaking of fast, the closing "Wings of Retribution" is the best, fastest, most varied and most vicious track on the record with insane drum work and chaotic instrumentation, a true culmination to the tale of vengeance.

While Serpent Crown’s work is certainly interesting, it suffers from lack of variety and solid songwriting. Even though there are excellent riffs, solos, occasional melody and serviceable production the material needs more variety, ebbs and flows, surprises. Serpent Crown should take clues from the closer for that. Perhaps this is why Dara & Co. choose to keep their full lengths (this being the second in their career) really short, barely qualifying them as actual albums instead of just eps. The listener gets a feeling already on the third track that he or she is listening to one long 27:15 track in 6 movements. Whether that’s good or bad is anyone’s opinion but to me it is definitely a disadvantage vis-a-vis disc enjoyment. Still, this is a fairly new band and I’m sure they will evolve into something worth giving more than a cursory attention especially giving Dara’s evident multi-talent.