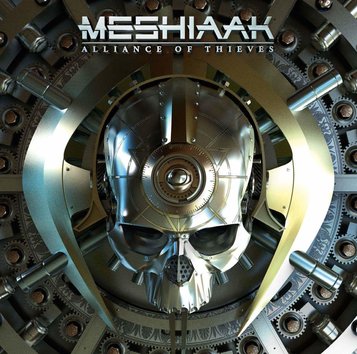 The Australian quartet known as Meshiaak is more or less a brand new outfit in the sense that the band was formed in 2014 while this 9-track album of theirs, "Alliance of Thieves", is the debut album. An impressive debut album, mind you. Interestingly, seasoned drummer Jon Dette who has trod the board with (legendary) bands such as Slayer, Testament, Iced Earth, and Anthrax is in charge of laying down the beat on the album, which, obviously, is a good thing. That guy oozes talent! Anyway, let us discuss the music spawned by Meshiaak and quit the name-dropping, shall we?

Musically speaking, "Alliance of Thieves" is rooted in (modern-sounding) thrash metal that brings to mind bands such as The Haunted, Testament, Anthrax, Machine Head, and even Devildriver from time to time (…sorry, there was that name-dropping again). Not that Meshiaak sounds like a copy of any other band as such, but those huge, crushing, and anthem-like riffs that are scattered throughout the album would not have sounded entirely out of place on, say for instance, a Megadeth or Testament album. The thing about Meshiaak is that these guys have incorporated a lot of progressive and technical elements in their songs, which is one of many reasons why the album is a varied and dynamic affair. Nothing is ever truly straightforward or simple, which is to say that "Alliance of Thieves" can be a challenging piece of work to absorb. I guess that particular progressive edge that the music possesses is why I brought up Megadeth earlier on. Countless shifts and changes in atmosphere, epic melodies and crunchy riffs, phenomenal drumming and juicy bass lines, mellow parts and introspective lyrics, and impressive harmonies as well as insane leads courtesy of guitarists Dean Wells and Danny Tomb. It is all there. Having said that, I am not entirely convinced by the vocals. They are certainly diverse, but I wish they were grittier and more aggressive and intense. That would have made my day. Unfortunately, you just cannot have it all, I suppose.

Whether you are into Slayer, Machine Head, or maybe even Lamb of God, you ought to check "Alliance of Thieves" out. Despite my reservations about the vocals, the album is well-produced, cleverly written, inhumanly tight, and musically engaging. If progressive thrash metal gets your dick hard, Meshiaak might just be a revelation to you!