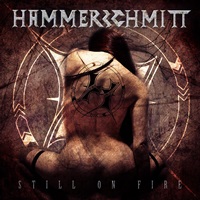 German band Hammerschmitt has been around for 20 years, and still with the original lineup in tact! "Still On Fire" as their fourth studio album represents a new twist on their melodic metal platform – as they transform from German lyrics to English probably in the hopes of gaining more international appeal. Taking in these 11 songs there’s a pulsating riff energy and high octane melodic presence that takes a lot of American hard rock spunk and channels it through their known European heritage.

Easy to understand choruses for "Sanctuary" and "Mean Streak" give off a Sunset Strip meets Victory/ Pretty Maids feel, while the band chooses an interesting cover with the Cranberries’ "Zombie" that has a little bit more of an up-tempo vibe and occasional acoustic guitar use during the verses to differentiate things from the original. A ballad like "Crazy World" has this campfire aspect to it, once again the acoustic and electric blends coming off very Poison meets Skid Row (the main verse having a similar "Every Rose Has Its Thorn" feel). Another surprise is the slower ballad transformation to the Motörhead classic "Killed By Death" – Lemmy and the boys would approve of this sad lament which is a tribute to his songwriting skills.

For my first exposure to the band, "Still On Fire" contains all the requisite songwriting, hooks, and catchiness that most melodic metal fans will get into – plus deliver the goods to be very exciting on stage as well. Another German band to add to your list to check into.