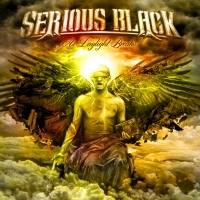 Serious Black is a "supergroup" originally featuring ex-members of Helloween (Roland Grapow), Blind Guardian (Urban breed), Tad Morose, etc., according to Encyclopedia Metallum. On this, their debut album they don’t deviate much from the Helloween style with a slant toward AOR. The focus is on big choruses, guitar solos and excellent vocals of Urban breed (ex-Bloodbound, ex-Project Arcadia, ex-Pyramaze etc.) and great drumming of Blind Guardian’s founder Thomas "Omen" Stauch. I really like Roland Grapow’s production; warm, powerful and aggressive but not terribly polished allowing each instrument to be audible at just the right level. The opening salvo (ending with a shot!) "I Seek No Other Life" floors me with its catchy melodic power while "High and Low" lets me down despite the chorus reminiscent of Christian Älverstam’s Scar Symmetry. "Sealing My Fate", of a soft start, catches my attention again for the great chorus and excellent guitarwork, recalling the best of Scorpions for vocal delivery. The subsequent "Temple of the Sun" is an ok instrumental while more aggressive guitars of Dominik Sebastian and Bob Katsionis attack in "Akhenaton" for another one of the album’s standouts. Serious Black keeps the aggression through favorite "My Mystic Mind" which opens on a staccato of synced guitars and Jan Vacik’s keyboards reminiscent of Symphony X for a very fast track that touches thrash in speed but remains within power metal realm while being fairly symphonic, Thomen’s drumwork really particularly fantastic, with the memorable positive lyrics about how fate is undecided. Alas, we are halfway through.

"Trail of Murder", with a verse-chorus AOR structure, an average track, fails to impress. The title track begins like Elton John’s "Lionking", entire track played on piano and violins with some rhythm guitars in the chorus, akin to Metallica’s "Nothing Else Matters", a beautiful tune, particularly the lyrics touching my romantic soul with phrases such as "a thousand fallen angels shed their tears in vain". "Setting Fire to the Earth", while not as aggressive as "Akhenaton", is reminiscent of Urban breed’s work in Bloodbound or even band labelmates, Evergrey, with a more bluesy solo. "Listen to the Storm" has a fantastic opening but the momentum is lost as soon as the vocals come in and the whole song disappoints with no direction and nothing to really hang one’s ear onto, one of album’s fillers, despite a great solo and relevant subject matter about a breakdown in relationship communication. The closer "Older and Wiser", on the other hand, is really good with great riffs and a sardonic smile cynicism bursting through the lyrics, plus a great chorus, for one of the best songs on this, slightly uneven album.

As this is Serious Black’s debut, even with the wealth of experience in members’ former bands, I did not expect to be blown away by "As Daylight Breaks" but I was pleasantly surprised in the end. I got an overall impression the band is best at aggressive melody rather than AOR material. There were a few weaker tracks which probably explains why they already put out a follow-up a mere year later.