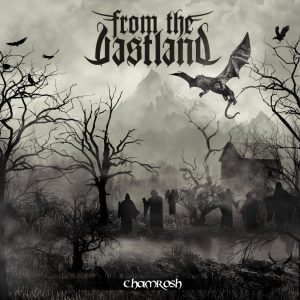 The Iranian black metal ensemble named From the Vastland is an interesting one. "Chamrosh" is the fourth full-length assault conjured up in only five years, so this is obviously a highly active and creative outfit with a lot on its mind. Well, actually it would be more fitting to say that main man Sina has a lot on his mind that he needs to vent by means of music since he is basically running the entire thing with a bit of help from members of Den Saakaldte, 1349, and Keep of Kalessin. One could be forgiven for thinking that From the Vastland might exhibit Middle-Eastern or Iranian musical traits, but the fact of the matter is that From the Vastland has more in common with the Norwegian band Iskald than any Middle-Eastern band that I can think of. Just so that we are clear on that.

"Chamrosh" is comprised of seven songs that are all between five and eight minutes long, so we are dealing with rather epic and majestic tunes here. Although the music is generally quite aggressive and to the point, some of the melodies that are scattered throughout the record are both beautiful and morose. The intense and ferocious onslaught of riffs is at times supplanted by mellow and calm parts that infuse the songs with a bit of variety, but I wish that there were more of those parts. One thing that bugs me is the vocals as they are way too (stereo)typical and linear to my ears. Sina’s black metal rasp is neither impressive nor convincing, which entails that the guitar work takes center stage and overshadows the vocals.

I cannot say that I am blown away by "Chamrosh", but it is definitely solid and entertaining to listen to. The majority of songs are pretty good and nicely structured, but the thing is that >From the Vastland is a bit too similar to countless other black metal bands out there, although one could argue that Sina is a better instrumentalist than most. It lacks a sound and an identity of its own, which is a damn shame, but then again, everything is so well-played and tight and so on that it is impossible not to find it engaging on some level. If cold, melodic, and epic black metal is your thing then check this out.