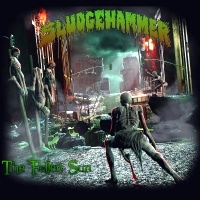 Thrash/heavy metal with a nod toward gore and Witchery riffing style. Lightening fast paces, relentless grinding with speed metal delivery that will have no youtube kids covering them for futility. The riffs change on a dime supported by dual (clean shouted and growl) vocal delivery of Chris Szarota and Dan Ayers as if in a two-headed beast. The songs do not have churus-verse structure yet do not feel like riff salads. The cleans and the riffing in some of the songs remind me of If Hope Dies but Sludgehammer is barely metalcore. I did not identify any filler, per se, but "Ectogenesis" seems to lack the impact, the intricacy and the complexity all the remaining 10 songs have plus it it did not strike me as particularly melodic or catchy in comparison. Not a bad song but does feel up to par (thus the score).

Holding to the great thrash metal tradition of smart pacing and variety after the one, two punch, "The Black Abyss" opens with a delicate piano turned Iced Earth like passage for a slower delivery, well, at least until it starts thrashing again which is sooner rather than later. Now Sludgehammer brings Revocation to mind while retaining its own identity, but the song is a serious nod to Iced Earth overall when it does not thrash like its life depended on it. Outside of Revocation, it’s been a while since I’ve heard such great, original riffs. Sludgehammer has also a great gory sense of humor as "Ectogenesis" opens up with some monster viciously devouring folks and female shrieks before some fast paced groove in a bit of a metalcore vibe , good, just, as I mentioned earlier, not as impressive.

Not shy to borrow from nu metal on "Carrion Eater" while still retaining excellent thrashy vibe the lead guitar mimics the vocals or is it the other around, ushering in a short solo Marty Friedman would not scorn. Nu metal riffs are again utilized on the hilarious "Consuming Afterbirth" (eew) which further showcases guitar Megadeth-like prowess, while "Carnivorous Forest" recalls Revocation but is the most convoluted with riffs so fast you’d start to wander if they’re even there. Sludgehammer, which has absolutely nothing to do with sludge genre, slows down to emphasize detail and showcase Fernando Willalobos’ percussive prowess. Fantastic song that has enough riffs in itself to feed the entire generation of metalcore emulators. Besides, "Utopian" has got another one for them if they run out.

Meanwhile, Sludgehammer is like some sort of thrashmetal energizer bunny not slowing down too much or for too long even on the 8th track because they throw in these little progressive touches here and there. Jeff Wilson and Tyler Williams are rapidly becoming my favorite dual attack for the sheer mastery, invention and originality. "Revolting" is now clearly influenced by Revocation and old Megadeth which still does not erase the truth of the previous sentence. How these Canadians can come up with so many fresh delicious riffs in one song is beyond me.

Don’t leave yet, as they serve two bonuses with "Organ Harvester" led off akin to "War Within" Shadows Fall and generally mercifully slower as I feel as if I just went through a washing machine and subsequently thrown in the dryer I now listen to more of a progressive edge Sludgehammer is very welcome to expand on on the follow up, but the final "Casualties" kicks me in the groin and laughs as I beg for mercy. That repetitive blistering riff at 1:40 mark, you hear that, that is the sound of a thrash revival that will come from Canada spearheaded by Sludgehammer. Recent Megadeth is not this relentless.  Take it to the bank. I am spent.

What more can I say except this is the greatest new band I have heard recently and one of the finest debuts ever. If this is the beginning I shudder to think what they plan ahead.