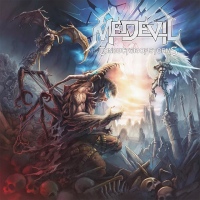 Canadian quintet rightly describe themselves in the words of their front-man Liam Collingwood as power/thrash/prog/heavy metal. Add large helpings of Black Sabbath and I can think of one album that matches "Conductor of Storms" in scope, delivery and powerful production – While Heaven Wept’s "Vast Oceans Lachrymose". Like on that masterpiece, the strength of the huge opener (Nightwalk) overshadows the rest as if the parts were really there: the sense of melody, great powerful riffs, the mood building, the ebbs and flows clearly influenced by progressive greats but they didn’t  seem to amount to actual songs. Upon closer listening from track two on one immediately recognizes "Machination Factory" and "An Empty Glass" as instant classics: melodic, heavy with ebbs and flows that really go great together and the subsequent brilliant "In the Distance" instrumental only emphasizes it with a progressive touch. Medevil does not offer the best at the beginning and then needlessly mellows down but rather instead of giving us more or less the same on every track, each song is like a different Narnia book of goodies, familiar to the rest but standing well on its own feet in the great progressive rock tradition.

Gary Cordsen’s  and Brett Gibs’ excellent guitarwork bends the likes of Pantera, Megadeth, Slayer or Mastodon patents to their creative will in the triumphant pursuit of their own identity. While "Machination" only flirts and teases with thrash, "An Empty Glass"‘s opening sequence is "Seasons in the Abyss" turned a triumphant power anthem that speeds up in the great thrash metal tradition only to wrap itself up in that same Slayer riff. The vocals of Liam Collingwood could not have been better, have more feeling and passion while perfectly expressing the message behind the music, almost like another instrument, something between Rob Halford, Ronnie James Dio, Bobby "Blitz" Ellsworth and Krzysztof Cugowski (Budka Suflera) yet still his very own. Eric Wesa’s bass is powerfully audible and adds full texture to the doom of thrashy riffs and Ross Collingwood gives a full display of his percussive skills most notably on "An Empty Glass".

The powerful "In The Distance" a gateway to the more progressive second side of the album invites "Angel of the Rain", acoustic Opethian beginning flowing into Pink Floyd, Liam now Bruce Dickinson now Marillion’s Fish as the storm rises on the thick electric riff power metal melody, only to recede into that Marillionian expression which itself ushers in a cavalcade of powerful rhythmic staccato as Liam utters the title of the album, a true conductor of storm. This play of light and dark, gentle and brutal continues throughout this album’s standout seamlessly ushering in "A Sacrifice", recalling Megadeth’s "Trust" buildup turned folky yet powerful melodic Mastodon would be verse, Cordsen/Gibbs "scratch jumping chocking" the scale in a technical Megadethism, Liam’s larger than life vocals leading the melody, guitars in perfect harmony with his utterance, crowning all with a spectacular solo ending the flow for a brief silence before "Escape" returns with a roaring "Holy Wars" shred, an underlying melody complete with adequate solo work. Probably the fastest song on the album, it should be the next single and whets my appetite for the gargantuan closer "The Fabled Uxoricide" which starts off as a mellow Camelian Iron Maiden meets Tool, with bass so thick you can taste it, yet it’s all still barely electric, as Liam’s now mellow now acidic expression gives way to venom and anthemic melody supporting another melody and Megadeth headbutted with "Crystal Skull" of Mastodon fame on the way through Edge of Sanity for a clear reference to "Blackwater Park", as the storm recedes in a brilliant luminosity of a Megadethian polymelodic bliss. "The Fabled Uxoricide" is Medevil’s crowning achievement, prog metal par excellence.

Canada continues to churn out bands that offer a fresh perspective on all of metal and Medevil joins Sludgehammer in my appreciation whereby may we finally get the answer to the question: what the hell do you all have in your water?