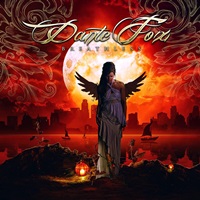 UK band Dante Fox have been a mainstay of the melodic rock scene – releasing their debut album in 1996 and taking a few breaks in their career while maintaining a high quality standard through their discography (having a personal affinity for the third album "Under the Seven Skies" from 2007 on Frontiers). "Breathless" is their fifth and latest record, fresh off a great performance at the HRH AOR 3 show last year – delivering another 11 tracks of timeless rock that has that 80’s flavor while not forsaking a little tip of the cap to the present.

Singer Sue Willetts Manford possesses one of the best, clear ranges in the business – alluring when called for and belting the high notes with bluesy swagger like it’s a regular part of her vocal toolbox. There’s a reason why it’s front and center on catchy numbers like the semi-ballad "Broken Hearted Man" and Journey-esque "Young Hearts". Guitarist Tim Manford doesn’t mess around when getting to the key lick and hook, as the second song "All Eyes on You" features a magnificent main riff that feels as West Coast AOR as anything, something that late 80’s Richard Marx would be proud of. The band knows how to get a little diverse in terms of a southern rock feel on "I Can’t Stop Tonight" plus a piano-oriented power ballad "Love Affair" that Heart fans treasure – another feather in the Dante Fox cap as you can’t sustain a following delivering the same old formula cut after cut.

From regular rockers to tender ballads, acoustic parts with electric offerings, it’s all in there for "Breathless"- and probably will live the listeners pleased and smiling.

CHARIOTS OF THE GODS – Ages Unsung