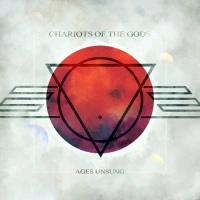 CHARIOTS OF THE GODS – Ages Unsung

Chariots of the Gods’ debut album "Tides of War" came out at a time when the chief metalcore bands, with the possible exception of Killswitch Engage who reinvigorated by the return of their original vocalist released the excellent "Disarm the Descent", were going through a decline in creativity. Chariots presented an album that actually had a lot more to do with melodeath than metalcore. The release was furious, melodic and COTG sounded like a seasoned band. In my opinion the new album is a step backward in comparison, whereby a more stripped down, decidedly more metalcore sound and songwriting was applied.

The album is still enjoyable: most songs are catchy, melodic, heavy and flawlessly executed. The 1,2 punch of "Tusk" and "Prometheus and the Sacred Flame" are two of the best on "Ages Unsung" with the latter being my favorite. Right off the bat, though, a noticeable tendency to use simpler verse and chorus structures makes me think back to the excellency of the debut. Had this come out as a debut then "Tides" would have been an improvement in comparison. Another troubling characteristic is decreased originality. There’s no easy way to say it but Rob Flynn might give you a call about the verse from "Tusk" sounding awfully similar to Machine Head’s "Locust"  (from "Unto the Locust") and Strid from Soilwork may do likewise concerning the chorus in the title track. Especially that first example is a cause of concern as I listened to "Tusk" and "Locust" back to back and I don’t say this lightly but Chariots are approaching plagiarism. The song is still great but I cannot overlook that inconvenience and thus I shaved off additional half a point from the score.

Whereas the Canadians drew heavy inspiration from Unearth on the debut, which made for a stronger release since Unearth is not pure metalcore, on "Ages" Chariots are taking Trivium and All That Remains to task as well as heavily referencing Killswitch (with Jessie). Songs such as "War of the Gods" (where I hear the phrase "burn my eyes" at 2:42) and "As The Sky Falls" would not be out of place on "Ascendancy" or "Vengeance Rising", while "Resurrection", arguably album’s weakest track, is verse heavy All That Remains from "Fall of Ideals". Questions can also be raised about the inclusion of a very Staind-sounding "Through Darkness and Decay", a half ballad where Chris Therrien sounds so eerily much like Aaron Lewis, I mean, croons and phrases exactly the same way Lewis does on "It’s Been A While" from "Break the Cycle", it gave me a start. Judging by the lyrics, I do realize that the song is a profoundly personal way of Chariots to get rid of their personal demons but it breaks the momentum, is structurally unsound and does not fit well with the rest of the album despite its KsE faster part and the admittedly spectacular solo. Similarly, on the title track he sounds so much like Strid in the chorus, though the verses are more All That Remains, that I begun to look for info on guest appearance. I am willing to bet anyone who knows Soilwork will easily make that association.

Leaving the comparisons behind, "Ages" does have more standout tracks such as "Into The Oblivion" or the title track (regardless) but the first half of the album sounds a lot stronger. I listened to this album about five times and subsequently to the debut and I still judge the debut to be a stronger, heavier and a more original affair. Chariots need to think about whether they want to be known as the Canadian Trivium (which they do sound a hell of a lot better than Matt Heafy’s band lately) or KsE or do they want to develop their own sound. The debut may have been a bit less catchy in places but it did sound like a work of an original band, like they had their own style. "Ages Unsung" sounds too much like a tribute band in way too many tracks to be considered original. Given the strength of the debut I believe they have the potential to regroup and surprise yet again but as for this, it’s an enjoyable but ultimately forgettable release.