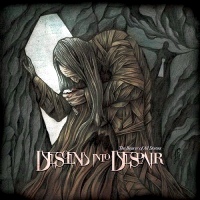 DESCEND INTO DESPAIR – The Bearer of All Storms Disc

Go to Encyclopedia Metallum type in the name of the band and click on the tab "Similar artists". It will say "No similar artists have been recommended". Romanian Descend Into Despair (DID) is a new band and has only one record, this one, and what a record it is! This album has been pretty much the soundtrack of my life for the past year along Mar De Grises "Streaming Inwards" (a fantastic death/doom album, highly recommended). This is a double album because as a single CD it would have clocked in at a whopping 92:01 minutes. I assure you that not a note is wasted or a filler found. Both discs are a complete and necessary package, a story of a man whose story I further develop in this review based on the music alone. The concept is not new but the way DID expressed it in the lyrics and the music, which is absolutely spectacular, how they combined different musical (not just metal) elements to create this masterpiece is definitely new, original and fresh. No two songs are alike in this 7 song doom manifesto and every track is gargantuan with the shortest one at over 8 minutes. Every musician, including the  multilevel vocalist, has given the absolute best on this album and you can hear it in every note. This is an album that recalls the metal albums where it did not matter what style or how long or heavy the album would be just as long as it was good music. This is just a work of musical art in the highest, unrestrained form of expression.

The first disc is more dynamic and metallic, while the second is more classical and operatic while retaining metallic elements. The music can be, at the core, described as funeral doom but there are elements of alternative rock (Triangle of Lies), Depeche Mode, in terms of vocals and unidentified strange sounding instruments that may or not be keyboards, characteristic of Alan Wider (ex-Depeche Mode, currently Recoil) on a number of tracks (Mirrors of Flesh, Triangle of Lies, Embrace of the Earth, The Horrific Pale Awakening), black metal (The Horrific Pale Awakening), death/doom of My Dying Bride/Paradise Lost and the paranoidal horror of Esoteric variety (Portrait of Rust, Pendulum of Doubt, Horrific Pale Awakening, Plânge Glia de Dorul Meu), gothic metal (Portrait of Rust, Mirrors of Flesh, Pendulum of Doubt, Embrace of The Earth) and finally the entire album is drenched in classical and operatic influence especially "Pendulum of Doubt, "Horrific Pale Awakening" and the closer "Embrace of The Earth" as well as in the eclectic spirit of old Opeth. Often the non-metal passages express the depth of what the artists want to convey better than any genre of metal. The music alternates between slow, very slow and a slightly moving crawl and sequences change very much like movie scenes. In fact, "The Bearer of All Storms" would make a terrific movie or a book. Musically, Descend Into Despair is catchy and melodic but I cannot give justice to the amount and strength of the emotions this song and this album awakens and that also due to no small influence of the vocalist extraordinaire Mr. Denis Ungurean.

Ungurean growls, growlingly whispers, utters inhuman noises like demons in flesh or a wounded bear, cleanly croons giving Martin Gore and Dave Gahan (Depeche Mode) a run for their money, utters melodeclamations, black metal rasps and singularly and in the choir sounds basically like a pack of ravening ghouls and goblins when he does not usher in near operatic highs that recall Vortex from Borknagar while also handling deep, thick and deafening bass.  The music is, at its core, created with Casmin Farcâu’s rhythm guitars and Alex Cosaciuc’s leads but layered and intertwined while frequently entirely replaced with Alex’s and Florentin Popa’s keyboards, violins, acoustic guitars, creepy church organs and whatever else that I cannot identify. Additionally heavy use of choirs and specially distorted vocals is utilized for good measure and to create a totally cinematic effect in tracks such as "Horrific Pale Awakening" and "Embrace of Death". The melodies created on all instruments are utterly fantastic and original and Cozaciuc seems to be under a great influence of Greg McIntosh (Paradise Lost) and the album "Gothic" which is particularly strong in the opener "Portrait of Rust" (which starts the album similarly to the Brits’ second one), "Pendulum of Doubt" and "Horrific Pale Awakening". Additionally, they have that Eastern European flavor of local folk expressed in the melodies of all instruments. People sometimes ask whatever happened to the likes of Beethoven or Mozart in music and I say there’s a whole style of music you are not checking out for proof of like talent and ability, such as Descend Into Despair.

The story is partially inspired by the lyrics some of which are available on the internet (of which "Mirrors of Flesh" I translated into Polish and posted on my fb profile with appropriate credits to the originators), which also reveal the heavy use of phrases only a person whose English is not the native language could come up with such as "shrieking sorrow" or "horrific pale awakening" because it requires thinking back and forth in two different languages. The protagonist is a story of a man in despair, a man who feels like he is carrying the weight of the world on his shoulders, a man who has been denied happiness for so long in his life he is at a point where death would be a blessing, feeling like he struggles against forces stronger than he, falling from the very light of existence and is inevitably headed for doom he cannot fully comprehend. The continuous unhappiness and pounding misery life inflicts upon him causes him to give off unfriendly vibes which in turn causes people around him to treat him horribly or shun him. His prayers to God avail nothing as he seems to have been abandoned by heaven. He is driven toward and drawn to the darkness as he begins to transform his sorrow and misery into hatred and thoughts of vengeance unbeknownst of what it does to his soul.

Finally, he gives in, a gruesome ghastly scene of nothing less than a decent loving human being turned into a demon and we all made it happen, we all somehow contributed. The transformation is akin to the one depicted in Morbid Angel "Covenant" videos. As a demon in human flesh, he inflicts unimaginable suffering on people not unlike Anakin Skywalker turned Darth Vader. However, tormented by conscience he begins to look for ways by which the tragic persona may finally be laid to rest. He threads  through an abandoned cemetery to find a suitable grave, chased by ghouls and goblins who are the souls of everyone he hurt in life as a demon. But they leave him alone. The protagonist/antagonist prays for death and there is a considerable hope that he will be heard. He becomes human again so that he can fully express his disdain for being alive in any form, a shattering expression of a deep longing for a total annihilation of his existence. The heavenly powers convene on whether his plea should be granted as he waits and angelic choir sings the song of mercy to the Lord of Hosts as he grants the wish of a tortured mandemon and the final piano chords confirm he dies and is no more as requested. This a story I get just from listening to the music and I realize it may not necessarily be what the artists intended.

"The Bearer of Storms" is simply the greatest musical endeavor I have ever heard in any genre of music and, combined with being the soundtrack of some of my darkest hours in life which soundtrack in all probability spared me the fate of the protagonist on the album, it has become my favorite album of all time. When people ask me from now on what my absolute favorite album of all time is I should say "The Bearer of All Storms" by Descend Into Despair. And the guys are already working on a new one which to quote the band they "believe to be a considerable improvement". Yikes.