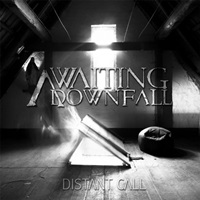 Starting in 2009 and going through the usual newer band lineup shuffles while honing in on their sound, Germany’s Awaiting Downfall released their "No One Will Be Spared" demo EP in 2014, setting the stage for this full-length album "Distant Call". Wisely seeking out the production, mixing, and mastering abilities of Seeb Leverman from Orden Ogan puts any fears about the quality and tones herein out the window – allowing me to focus squarely on the musicianship, songwriting, and quality of the material at hand.

The four-piece possess a sound that has a crisscross nature between modern metal and melodic thrash – the vocals can be clean as well as gruff, while the guitar play has this harmonic thread throughout, even if the rhythms are heavy and pummeling. Many listeners can launch themselves in bodily motions to the sick mid-tempo transitions/groove changes that go blasting one minute and then pit churning the next on early highlight "Smell of Deceit", which also features a couple of strong lead breaks with twin ripping action from Maximilian Gockel and Martin Lohmann. Occasional use of acoustic guitars intertwines with the electric proceedings, creating a different ambiance on "Awake" – the harsh vocals giving off a semi-metal core touch, while the clean parts have this alternative, almost emo-like quality. Because of this versatility, everything from 90’s period Metallica and Machine Head to Sonic Syndicate and Trivium come to mind when taking in these 12 songs.

Pluses include the adept, killer drumming abilities of Philipee Labonde – check out his pounding main verse duties against the Soilwork-ish blast traits on "Defective God" – as well as obvious skill sets that keep the quartet from reverting to clichés or breakdowns to gain attention. The problem is, the attention-deficit nature of music listeners today probably will struggle to consume an hour and ten-minute product in one sitting – never mind on a consistent basis. As such many ears will miss out on the galloping glory that is "The Only Way to Overcome" or commercial-oriented "Greet the Vultures" that make the second half of the album as entertaining as the first.

Awaiting Downfall need to work a pinch more on the clean vocals (pop punk whines get old), but outside of that "Distant Call" should appeal to modern metal and fringe thrash audiences.