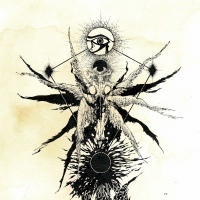 The third installment of the Australian trio picks up right where "Almighty Arcanum" left off and takes us right back to hell. Immediately after a somewhat pointless guitar intro I’m thinking Azarath from "Blasphemer’s Malediction" for the sound and climate but the music is closer to Enforsaken’s criminally underrated "Forever Endeavor" right down to the vocals. The musicianship is significantly improved from the predecessor as is the ability to both slay and captivate as well as to pace themselves for a greater intake. Simply put, better songs. Watain does rear its ugly head but the quality of songwriting makes me no longer care about the associations. Denouncers are finally crafting their own niche in the hybrid black/death genre while helping themselves to thrash metal not unlike Azarath on "Maledictions". The production values shine the light on the specifics of the craft and allow this still fairly new band to put their strengths fully on display. By the time "World Encircler" rolls in you don’t want to stop listening for the music ebbs and flows like never before. Denouncement is not afraid to bend the songwriting to their creative will by throwing in elements of doom and melodies that almost qualify parts as melodeath, but in the same vein as melodic death metal of Edge Of Sanity from "Unorthodox" was not yet a separate genre, DP just have a great feel for it and are clearly at their creative peak.

Every song introduces a new, fresh riff as if these guys were seasoned veterans. The band said themselves that they wanted to go for the most complete album in their discography and they succeeded beyond expectations. In times, one recalls Behemoth and Watain and thinks of some of their work as actually lacking in comparison. While "World Cremation" was just pure energy and "Almighty Arcanum" worked on the right climate, "Black Sound Unbound" combines both and adds triple the ferociousness and ups the catchiness and variety for a record that can finally be reckoned with in the genre. Most importantly, the songwriting improved so much that we can finally be talking about layers within layers and finding new things with every exposure which is the definition of musical mastery. Comparing this to their past is now like apples and oranges as they truly must have spent hours and hours perfecting these songs to sound this good. In fact, if you’re only now warming up to black/death this album will serve as a great introduction.

I also love the transitions from song to song such as on "Revere The Pyre" with an almost power metal melody in the opening sequence. Every instrument is in the right place and sounds just at the right pitch. This is simply what black/death should sound like, clean but not polished, rough and ethereal but not muddy. Most importantly, there’s no more a tendency to want to fast forward or skip as every song has elements you don’t want to miss, hooks coming at you left and right as you progress. Just check out the brief doomish death break in "Witness" that sounds like something My Dying Bride might churn out or the ending in the similar vein, the song steeped in doom influence, or the opening melodeath melody in the subsequent "Transform The Aether" where the vocals are replaced with a low screech like noise which transforms into the closing "Sophrosune" with a melody faded out in favor of some acoustic strumming before the slow tortured doomy melodic pacer wraps it all up in an epic climax that is unlike any ending they served on the previous albums.

While by no means a perfect album, "Black Sun Unbound" is head and shoulders above the two predecessors as Denouncement Pyre ups the ante on every level while finding some much needed identity for themselves. There is still plenty of room to grow but I will await their next record with baited breath