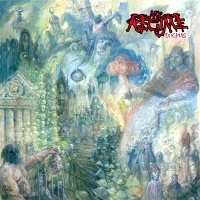 "This band is my ventilation to get rid of some unhealthy anger. Both in a musically way, but also in a mental way. I feel I need it to keep me sane in a politically correct and insane society. Especially living in a country that is selling out all the progress what past generation has achieved. I feel the need to ventilate the madness of certain ideologies that are taking us in the wrong direction. I can’t think of a better way than to express it through some good old thrash songs. I’m talking about Thrash the way it was in the beginning. Fast, angry and raw" – Spice, My Regime founder.

That’s one way of putting it. Another way is to say that "Dogmas" is the album Slayer should have recorded after "Divine Intervention". It has the energy, the chops, the power, the skills, the speed and the songwriting Slayer has not showcased combined since 1986 classic "Reign in Blood" and which they tried to capture on the follow up to "Seasons in the Abyss". Frankly, I didn’t think thrashterpieces like this could still live on in someone’s head much less materialize.

Spice is pissed off all right. The guitars are sharp relentless and evil. The songs have that hi, kick your ass and leave you half-dead quality to them known from "Reign" where it ends before you know it but when you want to close the door behind it it hits YOU in the face as another track rolls in like a German tank through streets of Warsaw in 1939 (see I can say that because I’m Polish). At 14 tracks averaging 3.5 minutes of which the longest is 4:26 your math correctly identities it as wham bam thank you m’amme affair and good, too, because anything longer than that would drastically lower your chance of recovery. This album makes me sad I no longer have a car to blast it from heading down the speedway.

Approximately half-way through "Agony in the Garden", a short instrumental slow burn interrupts the beatdown so that you can get some much needed refreshments and water which will do you no good as the "Suicide Crist" kicks you in the stomach so hard you give them all right back. Nevertheless, "Cuba Libre" slows down to apparently pay respects to Che Guevarra or to lampoon him, I’m not quite sure. Spice pays attention to the old adage, too much of a good thing can be fatal, as he goes for the slower more modern Slayer style akin to "Divine Intervention" on "Fake Breeze of Summer", but the solo is more Megadeth than Slayer and the ending recalls "Countdown to Extinction". "The Ghost" begins exactly like "Seasons in the Abyss" or "Spill The Blood" so the Slayer association prevails all the way to the end in this instrumental right before the closing "Get in Line" reminds me of the last song on "God Hates Us All" as I almost expect to hear Spice yell "Payback’s a bitch, motherfucker!" which he never does.

I had to take off a whole point because the associations with Slayer are so palpable I can taste it in every track. The ideas, while excellent, seem to be drawn liberally from 1980’s/1990’s and even some early 2000’s and it’s hard to call My Regime original. But I dare Slayer to record something this good even if they still had Jeff Hanneman in their ranks, so who the hell cares what does My Regime sound like. Mission accomplished, Spice.