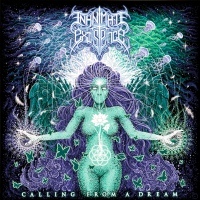 Inanimate Existence (IE) started out as a more deathcorish tech death "riif salad" on the debut (Liberation Through Hearing) but already on a follow-up (The Never-Ending Cycle of Atonement) incorporated melodies and unexpected twists and turns beyond mere technicality in the vein of Decrepit Birth or Pestilence. The third installment, "Calling From A Dream", is their most melodic and catchiest affair not the least because of heavy addition of female vocals to compliment the standard bark/growl vocal delivery. The material is still plenty brutal (check out The Arcane Crystal approaching Emperor in climate) but there’s just a lot more going on whereby IE gains a more progressive edge akin to latter Death and Atheist (always present from the start but here more pronounced) as well as Fallujah, possibly because of the spacey-eerie vibe to it.

One thing that has always worked in these guys favor is the production whereby the thick militaristic riffing really kicks you in the face while simultaneously making you grin from ear to ear. If you can invent better therapy than music let me know. This music is so rich; brutal yet so beautiful and gentle through moments of combination of dreamy female vocals and ambient passages as the guitars seem to be climbing the scale backwards (if that makes any sense) and return for thick sick down tuning which recalls All Shall Perish but more artistic. The solo fills get Middle Eastern on "Pulse of the Mountain" with Nile-istic quality but at this point the formula gets a little familiar as this is still for all intents purposes and variations, sexied up tech deathcore with the signature breakdowns of the genre. The vocalist seems to be telling some horrific story, as if he were commanding an army of drone slaves to do horrible things to people this side of "Annihilation of the Wicked". "Upon Whiling Winds" starts off similar to Death’s "Empty Words" but the whole song is slower, much more melodic and sort of…pretty, but seems to be a little disjointed. The music is still top notch overall, but the songwriting is all over the place. It feels as if we were trying to do too much at once and believe me I know the feeling. As I am half-way through the album I crave something that will knock me down either with overwhelming brutality or enchanting sweetness not necessarily at the same time. The concept of light and dark (recalling Ne Obliviscaris) can be fun when done in reasonable proportions.

Indeed, "Dreaming of New Beginnings" breathes a little fresh air into my ears, slower, stripped down, ethereal and short. From here on the female voice is more prominent as are the slower passages in between merciless tech deathcore pounding. "Beneath the Mist" does offer quite a few dissonant riffs that recall mid era Immolation which I’m sure Bob Vigna would not be ashamed of. It seems, though, that the melodic quality of the previous tracks is gently pushed out in favor of increasing almost virtuosic complexity and a riff salad begins to take hold of this recording, as we are getting close to the end. The closing "Burial At Sea" showcases the most melodic and technical yet, too, ambient side of Inanimate Existence and sums up the whole album quite effectively if fairly shortly.

Overall, this album is a progressive step for the band that is still a little rough around the edges. While differences are noticeable from the previous two albums listening back to back to all three may get a bit monotonous. At times, it seems as though IE doesn’t seem to know where they want to go with all these old and new elements. While they are no doubt great instrumentalist and composers they seem to require more work tightening those songs for a bigger impact.