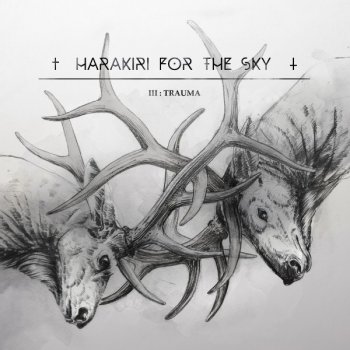 The group’s second disc "Aokigahara" was a wonderful display of very melodic black/shoegaze occasionally approaching melodeath and Katatonia, particularly impressive on a favorite "Homecoming: Denied!". The greatest thing about this band is they never for a second cease to be catchy and melodic even at hyperblasting speeds. You just can’t get yourself to turn this off and there’s so much going on in one song. The songwriting is top notch and the melodies galore pop out of nowhere trading places or criss crossing. The vocals of JJ and all instruments handling MS (that’s right – two guys!) complete the ensemble for a very satisfying meal and I would rate it a 5/6.

Are these fantastic ideas continued on "III – Trauma"? The short answer is yes, with a better production. The lead off "Calling the Rain" is utterly fantastic. HFTS achieves greatness with a simple but haunting melody on which variations and fills constitute the entire track but the effect is epic. JJ’s bellowed vocals (recalling Joe Dupplantier from Gojira) and lyrics seem to echo personal tragedy (or trauma) of a waste or simply injustice as he bellows "Fuck this life…Fuck my life" in utter anguish and despair to a spectacular production and climate. It has something of a Trent Reznor (NIN) feel to it, so bombastic yet so controlled. I can listen to this song on repeat over and over and fail to get bored or even fall asleep. "Funeral Dreams" is downright Katatonian in places (think "Tonight’s Decision") when it is not full on black metal, that is. Again, people, two men. And damn if we’re not merely on the third track! Then again, it’s an 8 track affair.

"Thanatos" confirms my Trent Reznor associations as JJ suddenly croons like Marilyn Manson on "Tourniquet" (Antichrist Superstar) but it fits the song and is soon followed by relentlessly melodic black metal. You can berely call this shoegaze, at this point, as it actually has a lot more in common with melodeath. Take "This Life As A Dagger", for example, on the surface sounds like something off of Les Discrets album but as it progresses, In Mourning or even Insomnium comes to mind for the gorgeous and complex melody that ebbs and flows like a Beethoven symphony bathed in Katatonian spirit. If the second half of this album is this good I will have a partner to Evergrey and In Mourning.

Immediately, "The Traces We Leave" ups the ante in catchiness and the number of different melodies in one track for one of the best songs on the album. "Viaticum" does the same but the riffs get raw and grating and huge. The music unfolds as some sort of tragedy, a tragedy you can taste and it’s hard not to emphasize when the melody tugs at your heart like that, in the vein of "Above the Weeping World" Insomnium. I just love those gentle melodies but suddenly toward the end Harakiri changes into punk only to go back to the melancholy serving one more melody and another that sounds like something off "Fear of the Dark" Iron Maiden. Now I hear prevalence as the guitar allegedly wails in triumph over the condition but JJ whispers "Lost all hope" so obviously I’m wrong. So damn addictive, this album!

"Dry The River" has something of a vibe of a Darkest Hour instrumental meets Agalloch, as the quality, sound, changes on the dime and the catchiness is on the same level as theirs, but this the most varied and unpredictable song on this album, again, serving also a bit of that Katatonian spirit, from "Discouraged Ones". Then again, that album influenced so much of melodic metal it’s not even funny. Again, I can only praise Harakiri’s songwriting ability as every moment is maximized to the fullest potential of each element of the puzzle and you’ve got to love that ending shotgun blast mimicked by like riff! By the time the closer "Bury Me", a more aggressive, massive affair with probably the most ferocious blastbeats on the album, rolls in you’re sad that it’ll soon be over. Just another riff reminiscent of Katatonia from "Night Is The New Day" and the barrage of blackened melody fades, inspiring a longing for a reload.

As it stands, both albums are fantastic, "III – Trauma" benefitting from a bigger, fuller production and significant upgrade in the already magnificent songwriting. JJ and MS have talent pouring out of every orifice on their bodies and you need this so go get both, as I already put "III – Trauma" on my end year top five list, aware that I will revisit it many times after this review is published.