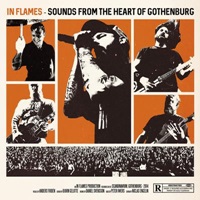 IN FLAMES – Sounds from the Heart of Gothenburg

A double live record/ DVD straight from their home stomping grounds, "Sounds from the Heart of Gothenburg" gives the listeners 20 songs and almost 90 minutes of material to channel, in anticipation for the next studio album to hit this fall. Background material alerts journalists that it’s not easy to capture a definitive set list with 25 years of history and albums to cover – but it’s a little surprising that the band only made two select choices in "Resin" and "Only for the Weak" from their first five albums that essentially made them worldwide headliners, while choosing to concentrate on the latest more streamlined, groove-oriented offerings including 7 songs from their latest album "Siren Charms".

It’s always been the age old debate – should bands progress, transform, accept new influences to grow, especially as tastes change and people grow older with new experiences… or remain in a little cubbyhole box never to stray away from a style that gained them the notoriety and initial popularity? Judging by the audience participation moments during "Trigger" and "Take This Life", it doesn’t seem to really bother the 10,000 strong who witness this live performance. You just notice the difference in guitar melodies and vocal choices during a classic "Colony" cut like "Resin" versus the slow, churning groove riffs and modern effects that make "With Eyes Wide Open" empty and without individual impression. While my affinities remain with "Colony" back as far as discography, you can’t deny the powerful impression songs such as "Cloud Connected" and "Mirror’s Truth" make, the drum/guitar syncopation drilling jackhammers to the body and heart.

As with most things relating to In Flames, this document will be important for some and a beverage coaster for others. When it comes to delivering live, "Sound from the Heart of Gothenburg" proves they haven’t lost much in that department – so approach accordingly based on your tastes.