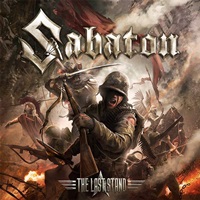 At this point in Sabaton’s career, they’ve established their presence as a melodic power metal band that deliver war-theme topics in a triumphant, heroic manner. Their latest album "The Last Stand" continues that tradition, adding in a few bagpipes/ Hammond Organs here and there on "Blood of Bannockburn" (regarding the Scottish Revolution) while a lot of guitar riffs trill out in marching strains on another highlight "Rorke’s Drift".

Sure to appease the faithful, it’s another tidy, tight album where the band gets to the choruses quickly and sets up plenty of vocal themes for larger than life audience action when touring said effort. Double bass salvos set off "Hill 3234" like cannon blasts, while Joakim’s lower register, throaty delivery sets the stage for another rousing chorus. Many will be critical of the keyboard heavy antics during "Shiroyama" or opener "Sparta", but I’ve always felt it’s been an integral part of the musical foundation for Sabaton’s power/dramatic antics.

"The Last Stand" is a logical follow up to "Heroes" as the band prepare to spend another year or two on the road spreading their sound to the masses. "Winged Hussars" has a lot of "The Art of War" keyboard/drum syncopation going on right from the first measure, probably another certain set list favorite. Steady they ride, hopeful to appease the Sabaton legions that grow day by day.

WIRED ANXIETY – The Delirium of Negation