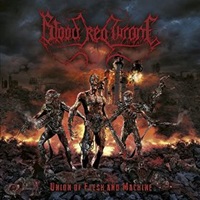 The eighth studio album from Norway death metal unit Blood Red Throne, "Union of Flesh and Machine" illustrates the power and brutality related to a straight ahead attack in this genre. The delivery and execution has more in line with American counterparts than Scandinavian ones for sure – especially in terms of a lot of the slower ‘crushing’ transitions that give ferocity in live situations and also magnify the faster riffing when the pace picks up.

Vocalist Yngve ‘Bolt’ Christiansen has a deep growl and maniacal scream propensity, both used to bone chilling depths on highlight "Proselyte Virus" against the wall of riffs and pummeling double bass segment shifts. Cannibal Corpse, Morbid Angel, and Suffocation would be very proud to consider Blood Red Throne reference points, although a lot of the songwriting itself has more of a smoother, less technical aspect on these 11 songs. The curse-laden introduction to "Patriotic Hatred" seems a bit unnecessary, although the high pitched guitar tapping and subsequent rhythms certainly subscribe to an evil tirade on all fronts. Midway through the album "Legacy of Greed" elevates their speed/mid-tempo change up game, guitarists Død and Ivan Gujic precision masters during the main verses and jackhammer-like blast beats.

"Leather Rebel" is a Judas Priest cover from the "Painkiller" album, given a death transformation in terms of lower tuning and obviously rougher vocals – but probably won’t convince many in the traditional camp to all of a sudden be a fan of this band due to their interpretation. Overall, "Union of Flesh and Machine" isn’t the worst album I’ve heard for pure death metal – but in the grand scheme of the landscape, it doesn’t stand out from their heroes and peers, which could make this lost in a sea of releases.