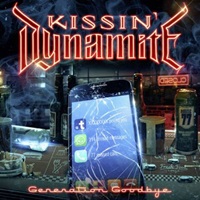 Shouldn’t be that much of a surprise that Germany’s Kissin’ Dynamite have been garnering a healthy buzz for their brand of melodic, modern hard rock since starting as the Blues Kids in 2002 (smartly changing names in 2008).  This fifth album "Generation Goodbye" continues the trend of writing a solid set of tracks that contain enough catchy hooks and sing-a-long aspects to keep interest from the first note to the last.

The arena rock/ Bon Jovi-like ‘heys’ along with the tribal groove drumming that pours from the speakers signal a title cut that lifts easily from the studio to the stage, vocalist Hannes Braun bringing the audience to their knees through his solid mid-range and powerhouse inflections during the trailing notes of the chorus. First video/single "Hashtag Your Life" takes the way many portray themselves on social media into those dangerous ‘self-importance’ measures, providing a fun party anthem while hopefully encouraging more active, in person social engagement rather than hiding behind technology. Taking on a little bit of an American modern rock approach in terms of the power ballad "If Clocks Were Running Backwards", the softer verses and louder chorus make me think of Shinedown or Alter Bridge, tasteful guitar work and smooth rhythm section action could turn this into a hit song if given the right major media chance.

At times ramping up the energy and speed factor makes the highway cruising "Highlight Zone" a personal favorite, the keyboard accents giving the song more of a Pretty Maids feel. Occasionally using whammy bar accents and uplifting lyrics pushes "Flying Colours" into another Kissin’ Dynamite delight, the ‘come on, come on, come on’ chorus build up rising with the positive mood of the arrangement. The 6:11 closer "Utopia" is the only misfire to these ears, a little too schmaltzy / Broadway-oriented that while dynamically different probably fits Avantasia better.

In the end "Generation Goodbye" keeps Kissin’ Dynamite near the top of the modern melodic hard rock brigade, serving up plenty of future anthems that should reign audiences in far and wide.