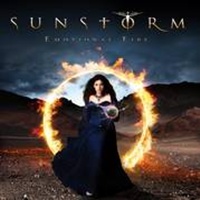 The fourth album from this project act contains ex-Rainbow vocalist Joe Lynn Turner, keyboardist/producer Alessandro Del Vecchio, and DGM guitarist Simone Mularoni among others. "Edge of Tomorrow" as a result has more of a heavier sheen to the normal melodic rock/ AOR proceedings. Prime-time Journey comes up right out of the gate for the blistering opener "Don’t Walk Away from a Goodbye", while the mid-tempo title track follow-up has that classy AOR sheen that put Bad English and Survivor on arena stages worldwide.

As the album moves forward, there isn’t as much energy in the performances or hooks/choruses to engage in repeated exposures. If you desire more of the hard rock side to JLT, "Heart of the Storm" and "You Hold Me Down" give those hero-oriented licks, keyboard passages, and soulful, powerhouse melodies you’ve come to know and love. It just feels like the songwriting on "Edge of Tomorrow" has that pre-disposed formula that loses a lot of spontaneity necessary for even veterans to embellish. The ballad "Angel Eyes" for instance reaches for the stars but sounds like an Axel Rudi Pell outtake from his Jeff Scott Soto-led period, with Joe occasionally crooning into Paul Stanley-territory that isn’t very flattering for his range.

Behind the scenes there is a lot of discussion between label people and the musicians themselves regarding musical direction, songwriting, and proper players to execute the ideas. "Edge of Tomorrow" isn’t the worst melodic hard rock album I’ve heard in the last decade, but it’s inconsistencies make for a could have been so much better final experience.