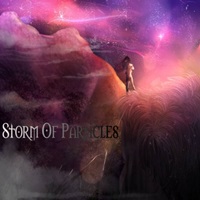 Born in March of 2015, Italy’s Storm of Particles quickly moved from covering their favorite bands to an original act – releasing their debut self-titled demo this year. 4 songs and a brief opening instrumental that revel in a melodic death platform that gains a fresh outlook through folk-oriented aspects pushed through guitar overdrive. Matteo Anselmi and Giacomo Biondelli excel at the twin axe harmony passages – but also can put in some serious heavy riff action, which both come to prominence for "Everlasting" and the closing "Silence Screams", where Matteo as a vocalist bellows savage growls a la Insomnium or Before the Dawn.

Many Finnish bands influence Storm of Particles, so at this point originality is not their strong suit. Groove and enticing hooks are prevalent, as is talent – so give them more time and experience and hopefully the quartet will cultivate a distinct direction and style of their own. For now, this self-titled demo contains active mid-tempo melodic death songwriting that won’t bore you to tears – recalling the wonders of Kalmah, Before the Dawn, and Insomnium… along with a pinch of Omnium Gatherum as well.