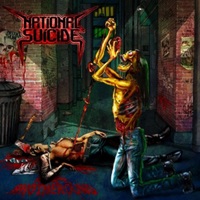 An uppity brand of thrash here from Italy’s National Suicide on their second full-length "Anotheround". Active since 2005, their debut album "The Old Family Is Still Alive" came out back in 2009, which begs the question…. Why did it take 7 years for the follow up? After multiple go arounds, "Anotheround" certainly has a lot of power, spunk, and attitude amidst the riffing, gang background vocals, and slamming Overkill meets Exodus/ Nuclear Assault grooves.

Vocalist Stefano Mini could be a dead ringer for Bobby ‘Blitz’ of Overkill, he’s got that raspy quirkiness and attitude down pat on numbers like the bubbly "I Refuse to Cry" and relentless "Fire at Will" (the latter featuring some pronounced bass break action and a neat classical twist in the instrumental section). Extended lead breaks give Tiziano Campagna and Daniele Valle ample opportunity to prove axe accelerating excitement and mind blowing note capabilities, check out "Scene of the Crime" and the more classic metal anthem-oriented "Nobody’s Coming" (think Accept here) for some of their best work on the record.

Beyond the fact that the rhythm section of Ivan Andreolli and Anthony Dantone slash and burn for bass and drums in the best thrash mannerisms possible ("Second to None" a jackhammer effort that will get blood pumping to every brain cell and toe), National Suicide has a lot of the technical chops down that the younger generation favor these days- while not forgetting the meaty riffs and hooks us old school folks enjoy. The only bummer is the cover art – something that seems more in line with a death metal act than thrash, but it shouldn’t dissuade most in the underground as this quintet means business.

Brought back a lot of mid 1980’s memories – and should fire up a lot of pits globally.