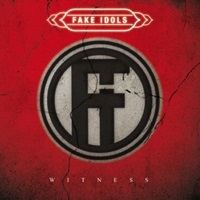 Ex-members of Italian melodic death metal bands Raintime and Slowmotion Apocalypse decide to form Fake Idols in 2013, releasing a self-titled album a year later. "Witness" is the follow-up for a new label in Scarlet Records, an 11 track effort that straddles the melodic/modern hard rock and metal lines. The quintet present focused songs that get to the hook quickly, provide catchy choruses, and do not overstay their welcome. Claudio Coassin’s forceful personality has that semi-sleaze edge while still being versatile/ radio friendly, as "The City’s Burning" (featuring Damna of Elvenking/Hell in the Club as a guest singer) plus the band’s interpretation of the Chemical Brothers’ "Go" illustrate.

Heads down energy a la the Foo Fighters meets Halestorm makes "Out of Gear" a great opener, the Ivan Odorico/ Cristian Tavano guitar team laying down a thick rhythm foundation plus offering some introspective clean aspects before the main lead break. Phil Campbell (formerly of Motörhead) adds his spirited axe tactics to the punky/ up-tempo "Mad Fall", probably one of the heavier tracks on "Witness". The band smartly grab the right riff/groove template more often than not, producing brain and body engagement to make "Could You Bid Me Farewell" one of the latter cuts for appeal. And if you want something that’s a bit more epic and thought-provoking, the 6:41 closing title track will give listeners a different dynamic, the alternative, almost industrial-like vocal attack against some gloomy guitar parts a 180 degree shift from the album. As good as the self-titled debut is, "Witness" seems to have an even stronger attack, the production probably having a lot to do with this as the riffs, vocals, and overall musical backing just jump out at you.

Proof that the best musicians in the heavy scene can shift gears from one style to another without missing a beat, Fake Idols can give a lot of the current Scandinavian superstars in this genre a run in terms of quality song for song output.