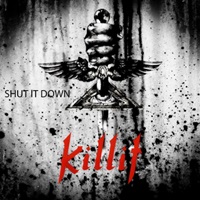 These days it’s not surprising to hear of a band coming together from outer countries and settling down in another active scene. Killit began in 2014, the quintet’s members spanning from Argentina, Hungary, Israel, and Britain – settling down in London and working on their craft before releasing this debut full-length "Shut It Down". What you’ll get is a 12 song effort that has a lot of bluesy hard rock appeal, yet can be very heavy and melodic to probably grab a good following from the classic fans as well as those into a few of the younger, modern bands reigning on the radio airwaves.

Building a stable of addictive guitar hooks, in the pocket tempos, and bluesy, multi-octave vocals, on initial listen cuts like "Say My Name" and "Don’t Look Back" have a lot of that old Guns N’ Roses attitude with a bit of that Alter Bridge/ Buckcherry current charm. Lead guitarist Niro Knox employs more precise notes for his breaks rather than going for show-off technicality, in line with say Joe Perry, Slash, and others of that ilk – check out the more commercial oriented "Calm Before the Storm" for a good example of his primary, efficient duties that elevate Killit to a higher level of respect. Also Killit gains appeal with a great front man on vocals, as Gaz Twist has a lot of chameleon like qualities that bring everything from David Coverdale and Robert Plant to Myles Kennedy up from front to back – sultry and slinky during the more energetic "See the End" while smooth and tender during the power ballad "Our Last Goodbye".

"Shut it Down" will not change the face of melodic, modern hard rock – but Killit deliver a spunky set of infectious tunes that should go down a storm wherever the band choose to go, and we could use more bands like this in the scene.