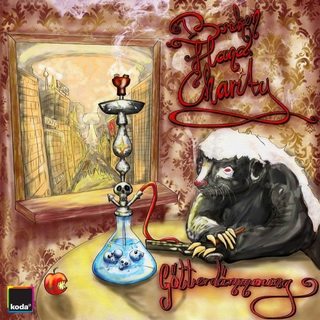 Broken Hand Charity is an alternative hard rock/metal band hailing from Denmark with a groovy rock ‘n’ roll vibe to it that brings to mind bands such as Alter Bridge, Volbeat, early Guns N’ Roses, Soundgarden, the latest solo record by Slash, and so on and so forth. One can even detect a few influences from Pearl Jam, Type O Negative, and Metallica. As far as I can recall, these guys have released three EPs previous to this debut album of theirs. "Götterdämmerung» consists of 13 bouncy tunes that are all somewhat catchy and easy to digest, and, as I mentioned previously, there is obviously a strong emphasis on groove within the Broken Hand Charity camp. Having said that, my main problem with the music is the vocals. I cannot for the life of me get used to them or enjoy them. Trust me; I have tried repeatedly to learn how to love them. The sad fact of the matter is that they possess neither passion nor charm to my ears, which really sucks, as I undoubtedly would have enjoyed this album more had the vocals been convincing to my ears. Musically though, these guys can definitely play, but the songs lack that extra spark and intensity that is needed in order to set the band apart from others within the same genre(s). Again, the riffs and melodies are catchy, but the album as a whole is not really that memorable.

"Götterdämmerung" does sound a bit formulaic and derivative in places, and, honestly speaking, there are many other bands out there who are doing the exact same thing as these guys only better. If you can overlook the vocals or somehow learn to like them then give this is a spin or two. Maybe it will appeal to you. It does have its moments, but in the overall perspective, I am not overly impressed or blown away.