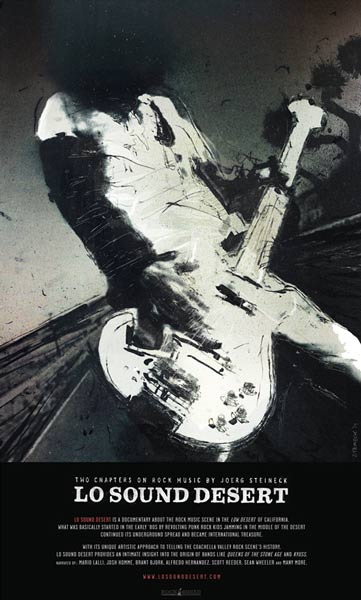 This brand new documentary entitled "Lo Sound Desert" by Jörg Steineck is quite the interesting thing. It focuses on and chronicles the birth and rise of what is termed the desert rock scene and how that particular scene was influenced by the vast, open, and somewhat desolate spaces of the Californian desert as well as the DIY and punk rock aesthetic of old.

Through countless interviews with musicians, bands, fans, and the likes, we penetrate the layers of an almost surreal underground music scene and gain a better understanding of how it developed over time. Bands such as Kyuss, Half Astro, Fu Manchu, Fatso Jetson, Solarfeast, and Unida as well as musicians such as Scott Reeder, Josh Homme, and Sean Wheeler are all included and figure prominently in the narrative. Many of these like-minded individuals (some of whom are pushing fifty) have spent their entire lives in the desert, and it is downright fascinating to see and hear where they picked up their influences, what inspired (and still inspires) them, what the tight-knit and anti-commercial scene was like back in its infancy, and how the untamed spaces surrounding them permeated just about everything they did. Longing, boredom, and run-ins with law enforcement also played a part in shaping the desert rock scene, and I might as well tell you right here and now that there are some amazing stories and heartwarming anecdotes on display here.

After watching "Lo Sound Desert", it felt as if I had just witnessed the inner workings of a secluded culture; a musical culture unto itself, if you will. The black and white footage, the grainy look and feel of the movie, the evocative shots of the desert, and the music itself work wonders for the mood and atmosphere of the film. It is both in-depth and engaging, and one can tell that this was a labor of love and that a lot of work and thought went into making the whole thing. It oozes substance. I seem to recall reading somewhere that Steineck spent ten years making this documentary, but I could be wrong about that. Not that it really matters, because the bottom line is that "Lo Sound Desert" is a captivating and passionate piece of work that actually brings something new and exciting to the table. I almost felt like a voyeur in places while watching this, almost as if I was seeing something that was too intimate, and I think that says it all regarding the quality of Steineck’s movie. This is the ultimate film about California’s unique desert rock scene. It is as simple as that.