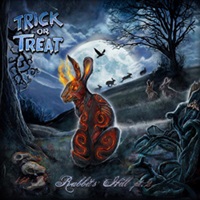 Inspired by the Richard Adams novel Watership Down which is a classic adventure story regarding rabbits who take on human traits and have to establish a new home because of the destruction of their warren (where they burrow and normally live), Italian power metal band Trick or Treat felt the book deserved a two part-concept recording, of which "Rabbits’ Hill Part 2" is up for scrutiny. 11 tracks and 61 minutes of music allows the band to really circle wide dynamics of the storyline, gaining more power during "The Great Escape", becoming heads down progressively heavy for the shorter "Beware the Train", also showing a little tenderness during the ballad "Never Say Goodbye".

Vocalist Alessandro Conti may be more well known in Luca Turilli’s Rhapsody, but his dramatic delivery befits the Euro-power melodies and hooks on display. He gives a little bit of Kiske-falsetto fun during "Cloudrider", while adding in some folk-like flavor with Sonata Arctica’s Tony Kakko on "United". The keyboard layers provide the right contextual set ups and atmosphere, especially necessary for the epic 11-minute "The Showdown", Guido Benedetti and Luca Venturelli participating in almost a classical axe duel to the death at times, the song reminding me of a montage of classic Helloween with Symphony X inflections. When the right musicians pick the right concept and bringing it to life, the reciprocal rewards occur for the author as well as the band – because more than most will now seek out the book to read for sure.

Proving that power metal can get back to more of an uplifting, happier time while still being musically relevant, "Rabbits’ Hill Part 2" could possibly gain as much long-term staying power as the greats in the business. Trick Or Treat deserve all the praise they’ve been earning over the years, and I for one am curious to hear what they’ll deliver next.