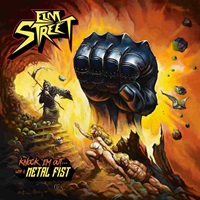 Fortunate to take in this Australian traditional metal band on tour in early 2015 as a support act for Skull Fist, it’s been five years since their debut album "Barbed Wire Metal" that didn’t exactly set my brain on fire, as the band struggled to come to grips in the songwriting sense as the influences were a bit too obvious. "Knock ‘Em Out… With a Metal Fist" as a result has a little more to live up to, and my belief is the band really did their homework to tighten up the hooks and compositions for a better overall final product.

Guitarists Ben Batres and Aaron Adie along with bassist Nick Ivkovic and drummer Tomislav Perkovic each gain a little bit of the spotlight during the highly engaging "Kiss the Canvas", a spirited number that floats between Helloween power metal and Megadeth speed/finesse. Ben as a vocalist decided that this material needed a little bit more of a screaming/screechy delivery, which gives an otherwise traditional anthem such as "Will It Take a Lifetime" more of a Alexi Laiho/Schmier texture to the catchy guitar refrains and steady, pounding drum parts. Militant mid-tempo marcher "Sabbath" impressed me when aired live last year, and still wins me over on this record, the Batres/ Adie twin axe action sure to captivate the audience who live for that harmonic catchiness, plus an interesting acoustic element appears in the mid-section to provide an aural reprieve.

The front two-thirds of "Knock ‘Em Out… With a Metal Fist" appears to be set up to bring the album title to fruition, as these are tighter songs that have killer riffs, tight picking, and a relentless rhythm section output – while the final two songs "Blood Diamond" and "Leave It All Behind" are the epics, at almost 12 minutes and 7:20 respectively. The former starts in Judas Priest "Painkiller" fashion, double kicks at the head before the guitars shift into a semi-progressive meets Grim Reaper feel, a lot of the instrumental sections stretching the musicianship to early Iron Maiden push and pull interplay, while the latter is a ballad that probably features Ben’s weakest, throaty clean singing performance.

In the end, Elm Street have a lot of great qualities going for them – they just need to accentuate their strengths (guitar knowledge, tempo skills, dynamics), and shed their weaknesses (clean singing not being their forte) for proper ascension.