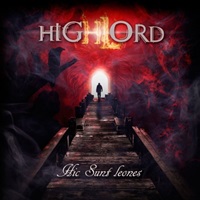 Years back I remember reviewing "Medusa’s Coil", the fourth album by Italian melodic power metal band Highlord on Arise Records, and then losing sight of the band for quite a while. So it’s a welcome addition to my catalog to hear "Hic Sunt Leones", their eighth studio album and first with latest guitarist Marco Malacarne. Considering the long history of the group, it’s surprising to hear heavier influences creeping into their conventional keyboard/guitar-oriented power style – including guest growls from Therion singer Linnéa Vikström for "One World at a Time" and the magnificent bluesy pipes of Spiritual Beggars’ Apollo Papathanasio on the more Firewind-oriented "Let There Be Fire".

We have quality players on all sides for the group – main singer Andrea Marchisio has more of an upper falsetto propensity, but can certainly sustain a note for several bars when called for, especially before the lead break in "Wrong Side of Sanity", while we get a bit of that darker, power/ exotic riff nature from Marco during "Be King or Be Killed", the keyboard orchestration set up in a Kamelot motif. Incorporating acoustic/piano flourishes for the beginning and instrumental moments of the ballad "Feathers to a Bird", the quartet proves they aren’t always stuck in electric mode – demonstrating proper pace fluctuation even in a melodic power metal record.

One downside to the full-length is the less than ideal mixing/mastering of "Hic Sunt Leones" – I feel that the drums need more punch in the kick/snare department, almost coming off a bit too digitally compressed for a metal record. Given the band’s last record "The Warning After" met with a less than enthusiastic response to these ears for its power/classic metal genre combinations, they seem to be heading in a more focused direction here. I do think the symphonic and heavier flourishes are necessary, and hopefully Highlord can continue to strive for uniqueness with their songwriting and performances.