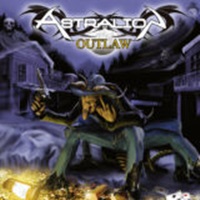 Celebrating their fifth anniversary as a band, Finnish power metal act Astralion release their second album "Outlaw" – and it’s quite a melodic driven affair to these ears. A delay in the album occurred during 2015 while keyboardist Thomas Henry took care of personal health concerns – probably allowing the quintet a chance to really dig deeper into the songwriting and come away more sure than ever about the final product. The band’s aim is to keep its eyes on catchiness for all aspects – in terms of guitar hooks, keyboard refrains, or choruses that can be easily delivered to live audiences for mass participation.

Those who love lightning fast power runs where the fingers dance up and down the ivory as the guitars churn at breakneck pacing and the double bass pounds deep into the body will have no trouble getting into "Black Adder" and "Nightmares Never Give Up" – two numbers that push their Sonata Arctica and Freedom Call affinities forward. Opener "Deathphone -Final Destination" has extra sound effects which work well against the mid-tempo arrangement, guitarist Hank J. Newman and vocalist Ian E. Highhill bringing the Nocturnal Rites-ish vocal hook and riffing to life as a worthy successor to material from their early 2000’s discography. A curveball can be thrown from time to time – a more emotional anthem such as "Wastelands of Ice" gives the listener a lower register, reflective effort where straight piano, clean guitar and a steady groove go hand in hand with the electric proceedings. But those who love positive power precision and laser beams of metal speed as well as higher than the heavens choirs will get the most joy out of this 10 song platter – and how can you wrong when "The Outlaw" or the ten-minute epic "The Great Palace of the Sea" rolls through (the latter containing some folk-ish bagpipe nuances beyond scintillating lead breaks).

Astralion fall into that category where they have enough of the epic/classic traditions that people love from early Blind Guardian albums, but also side heavily on the uplifting choruses and syncopated guitar/keyboard work that allows Stratovarius and Sonata Arctica to be headliners. A solid follow up to their self-titled debut, "Outlaw" is necessary for all power metal followers.