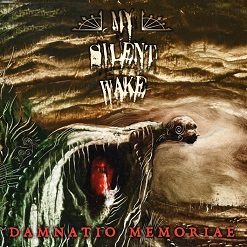 The morose death/doom metal outfit from the UK named My Silent Wake took me by surprise not that long ago by means of their wonderfully dreary "Eye of the Needle" album, which was actually more akin to dark ambient and drone than doom metal per se. The latest assault on our puny senses, the 8-song effort entitled "Damnatio Memoriae", is a solid and cohesive piece of work that is filled to the brim with crushing and gloomy riffs, dark and growling vocals, and oppressive atmospheres.

While early Paradise Lost, My Dying Bride, and, to some extent, Mourning Beloveth come to mind in places, My Silent Wake have a knack for weaving memorable riffs, melancholic melodies, and convincing vocals together in a most effective way that sets them apart from many other similar bands. I would argue that these guys also have a much firmer grasp of how to vary their tunes and make them sound more dynamic and exciting compared to the average death/doom ensemble out there. There are many nuances and subtle details that kind of sneak up on you the more you listen to this album, which makes it anything but one-dimensional.

The grandeur and overwhelming darkness of well-crafted songs such as "Of Fury", "Highwire", and "Chaos Enfolds Me" are both impressive and captivating to witness. If you are a moody sucker like me, you ought to check this one out. It will ruin your day, but in a good way.