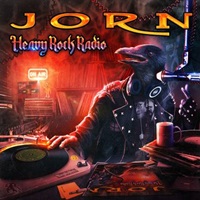 The magical voice of Jorn Lande – bluesy, deep, and powerful, it’s one of those deliveries that can carry any style convincingly. So it shouldn’t be that surprising that he decides on this go around to tackle some of the rock radio staples of yesteryear on "Heavy Rock Radio". 12 songs from the 1970’s and 80’s, hits not only in North America but often across mainland Europe or other parts of the world – and not necessarily exclusive to the hard rock or metal realms.

The opener "I Know There’s Something Going On" originally was a hit in the early 80’s for ABBA singer Frida, and he decides to inject a little more of his Coverdale/ Dio edge to the proceedings, along with a smoking lead guitar aspect surrounding the pulsating keyboards and solid drum groove. The follow up "Running Up That Hill" from Kate Bush has more of a standard hard rock feel, but doesn’t connect well versus the original, there’s something distinctly English about Kate’s original version that touches the soul a bit more. Keyboardist Alessandro Del Vecchio and guitarist Trond Holter serve up the best musical textures for Jorn to excel on the Foreigner oldie "Rev on the Red Line", while his interpretation of Deep Purple’s "Stormbringer" is 100% in his wheelhouse.

There will be favorites and of course a couple of songs that don’t convince me (Journey’s "Don’t Stop Believing" missing that main piano hook, replaced by guitar work), but overall "Heavy Rock Radio" moves beyond karaoke territory into proper respect and homage to material that has stood the test of time. Let’s hope for another killer studio record of original material soon though.

WHITECHAPEL – Mark of the Blade