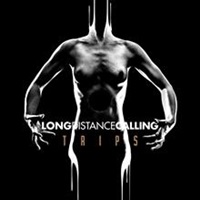 The fifth album "Trips" from German instrumental progressive rock band Long Distance Calling challenges views as most artists in the genre are prone to do. So much so, that we get vocals from Petter Carlsen from time to time, plus a strong 80’s connection to a lot of the sequences and musical interplay between guitars, bass, drums and keyboards. Certain songs pulsate in a post-rock meets alternative feel, the heavy sequences building during the chorus such as the passionate "Lines", a number that I think Fair to Midland or Devin Townsend fans will love because of its massive contrasts, or the opener "Getaway" that keyboard and drum wise contains a lot of 80’s Genesis effects in terms of the guitars weaving around the echoing keyboard refrain and robotic vocals.

Ironically the two longest cuts "Plans" and "Flux" appear at the end of "Trips"… giving the listener over 19 minutes of exemplary instrumental fusion, circular textures building to hooks and grooves from left field to only become spacious and serene. Long Distance Calling resonate deeply with the progressive rock community because they channel excitement, sadness, atmosphere and heaviness song to song, often movement to movement. Janosch Rathmer has drumming skills beyond most in the business, and along with bassist Jan Hoffmann sets the proper house foundation for guitarists David Jordan and Florian Füntmann to make magic on their axes, clean or distorted, painting an array of colors with odd shapes as only they know how.

"Trips" could represent one of their best works in an already impressive discography. Long Distance Calling continue to stun the progressive rock community.