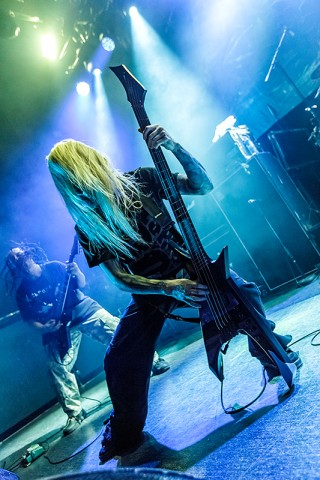 Blood Red Throne is undoubtedly the most recognized name in Norwegian death metal, and with good reason. From the moment the members entered the stage, they showed the audience of Inferno what brutal music is supposed to sound like. A stoundingly good performance with high energy on the stage and a great, big audience. Alot of people showed up for Blood Red Throne, and that is quite special since they were the first band on Rockefeller for the evening. Fans got what they came for and more so. This was basically a great experience.

Next band out was Sodom. Old school, trashy music filled Rockefeller and it was awesome. Sodom is a nice toast to what metal used to be 20-30 years ago and they really followed through with that during this concert. They may not  have been the most spectacular band of the evening visually, but these old timers showed a kind of energy that is rare among bands of Sodom’s age. Alot of other 80’s bands have decayed long ago, but Sodom keeps going strong. A guest appearance by Tore Bratseth playing Iron Fist as a tribute to Lemmy was also nice.

The problem with Suffocation is that they don’t really offer anything that hasn’t already been done. The music was rather uninteresting and the energy on stage seemed somewhat mediocre. Their audience seemed to enjoy themselves, but even they didn’t get anything grand from this performance. Suffocation has been better in the past and will be better in the future. As for this concert: Rather unevnentful and somewhat forgettable. Sadly a big step down from the previous two bands.

Nile is seen by many as the undesputable kings of modern death metal. They have an amazing team in the band and they are quite known for having one of the world’s greatest drummers. The audience loved every second of the concert and the band showed why they are one of the biggest death metal bands around. Kollias was in great shape, as was the rest of the band. Musically, it did maybe become somewhat monotone after a while for those that aren’t huge on death metal, but the fans loved what they were served, and that’s really all that matters. In the end, Nile delivered more than they had to, and they did hit their target audience quite nicely with a big performance.