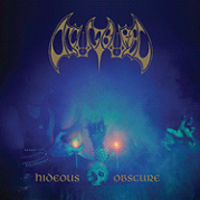 Invictus are a label known for bringing us some of the most innovative and interesting music doing the rounds today, especially in the realm of all that is black and deathly. Listening to their catalogue one can also detect more than a passing love for the old school and nowhere is that more evident than on this latest release.

‘Hideous Obscure,’ the debut from Canadian metal merchants Occult Burial, is a black thrashing opus that recalls the early years of Bathory, Sodom and their ilk. There is even a hint of Venom in the mix and a few moments that remind me of one of my favourite thrash acts, Razor. All of which is fine and dandy in my book. Occult Burial have not done much beyond pick up up that torch and making it their own, but expecting them to do elsewise would be missing the point really…

So – the sound is pretty cool and even the image harks back faithfully to the early 80’s, but what of the songs? Some great, some very good and some not that special is the answer. While there are plenty of excellent riffs and moments, ultimately consistency lets OB down here and there and stops this being the towering success it could have been.

Still,well worth checking these guys out if the genre described floats your coffin and definitely a band to watch.