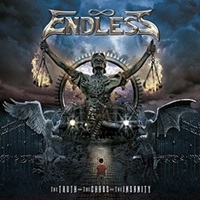 ENDLESS – The Truth, The Chaos, The Insanity

The third album from Brazil’s Endless, "The Truth, The Chaos, The Insanity" contains 12 tracks and over one hour of melodic power/progressive metal that is very much in line with South American mentors Angra as well as a lot of the European scene in terms of songwriting and performances. Classy melodic moments come up on both the vocal and musical front for "Will of Destiny", a lot of neo-classical shred work from Luciano de Souza and Cristiano Moura, as the vocals from Vitor Veiga move from Stratovarious/Helloween-like power to occasional doom/traditional aspects in the slower sections.

Dream Theater oriented progressive parts go hand in hand with the twin harmonies, keyboard layering, and outside bells and whistles – but there’s also a traditional foundation through the almost seven-minute title track that would make early 90’s era Savatage proud. Knowing that a lot of power mavens enjoy those speedier, frantic elements where harmonies abound- cuts like "Veins of Blood" and "The Code of Light" align themselves with uplifting synchronized keyboard/guitar sections and happier chord progressions, but there’s a sense that Endless also know that dynamic versatility is the key to never remaining stagnant or predictable.

Choosing to end the album on a slower, more epic-oriented arrangement, "Celestial Dreams" gives drummer Sergio Sanchez a little bit of a breather as the guitar harmonies sweep in and out against Vitor’s tender word emphasis- the background vocals giving the song more dramatic pause. The sextet are solid in their musicianship and songwriting – Endless will not be considered the most original band in their craft, but get points for execution.

If you like a decent cross-section of power and melodic progressive metal, Endless could be in your aural wheelhouse.