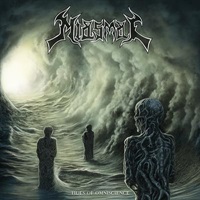 The third album from Sweden’s Miasmal "Tides of Omniscience" comes hot on the heels of the very impressive "Cursed Redeemer" from 2014 – giving a lot of the old guard renewed hope that the classic early death metal sound is not dead even this late in the game. First thing noticeable about the 10 song follow up is a robust production shift – a little sturdier without forsaking the low-tuned guitars and fuzzy bass elements that make this groovier style of death potent.

When you hear guitarist Pontus Redig shout ‘Go!’ at the end of opener "Axiom", you’ll be hard pressed not to jump up and get into action. Björn Erikkson has a tuneful manner to his brief blast beat action during "Deception", otherwise steady and stern in his upbeat snare, cymbal, and kick duties. Dynamics are key when you perform in this genre- too often the extreme elements gain the lion’s share of attention. Not so with Miasmal – they’ll throw in guitar refrains and rhythmic groove parts that can be mid-tempo as well as fast or slow to hook the listener in, check out "Perseverance" and "Dark Waters" for two different facets that work well in this regard.

Grave, Entombed, Dismember, and a little bit of Edge of Sanity come into play – the energy a lot of times explosive, as well as some of the segment changes surprising – the tapping action on the lead break for "Fear the New Flesh" one of the best I’ve heard from a death metal band in quite some time. Acoustic guitars come up during the introduction for "The Shifting of Stars" – a fitting closer as the haunting main riff and rhythm section groove together in an ominous, churning jackhammer way.

"Tides of Omniscience" is ideal for those who still love the 1990’s Swedish death metal sound – still musically sharp, but heavy as hell.