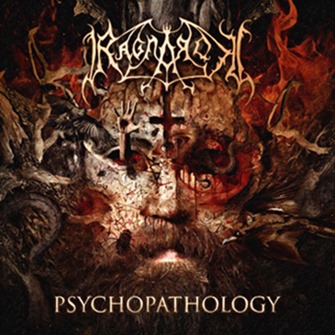 The well-known Norwegian outfit known as Ragnarok is back in the shape of this 11-track album entitled «Psychopathology». Actually, the band’s excellent «Diabolical Age» album, which dates back to 2000, was one of the first Norwegian black metal albums I ever listened to, as strange as that may sound. Since then, the band has released a bunch of solid and cool albums with different line-ups and constellations. Interestingly, «Psychopathology» marks a bit of a change as well in that Jontho, who used to be the drummer, is now the vocalist. And you know what? It definitely works. I do miss his creative drumming, though. Anyway, let us examine this new musical effort more closely.

The opening track, «Dominance and Submission», is a heavy, hard-hitting, and punchy thing riddled with atmosphere that establishes and sets the mood and tone of the album from the very start. As with the last few albums by Ragnarok, the music is quite diverse, which is exemplified perfectly by the song «I Hate». There are a lot of good and strong melodies present throughout that are memorable and even borderline epic. Just listen to the title track and you will see what I mean. The production is warm and organic and neither too clean nor too sterile. Having said all of that, there are a couple of songs somewhere in the middle («Into the Abyss» and «Heretic») that are not really that captivating, which is to say that the album loses a bit of its momentum half-way through only to regain it later on. It picks up again with the twisted and morbid «The Eight of the Seven Plagues».

As with every other Ragnarok album, nothing truly outstanding or monumental is to be found on «Psychopathology», but make no mistake; this is an interesting and entertaining album that may well be the best one by the band so far. It could have been slightly more cohesive and coherent, though. In a way, it is admirable and inspiring that the band has stuck to its guns for so long and never really wavered or strayed from its chosen path. Whether you are generally just into black metal or if you consider yourself a fan of some of Ragnarok’s earlier musical assaults then I suggest that you check this new grenade of theirs out.