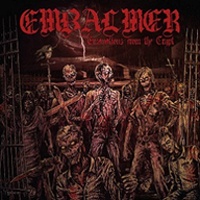 EMBALMER – Emanations from the Crypt

Fans of Embalmer have been waiting 10 years for this – their second full length release in career spanning 25 years. For those who don’t know the band, think Repulsion, Autopsy at full pelt or Impetigo when vocalist Stevo shuts up long enough for them to play a song. Personally, I love the death metal genre, but hate most of the modern acts who focus on brutality and technicality while IMO losing the central idea of what death metal is really about. In my book, that is: gore dripping riffs, graveyard vocals and skull smashing beats. It is not about fruity seven string bass solos or drums that are so triggered they lose all character and syncopation and sound like someone breaking wind into a microphone.

And so, as far as I am concerned Embalmer 2016 are a very close fit with my vision of Death Metal as it should be. On first listen, this album is deceptively straight forward and might even seem simplistic. But further listening shows a range of dynamics, some killer guitar work, unrelenting power and heaviness and quite a bit more depth than originally thought. What’s not to like about that?

THE NEW BLACK – A Monster’s Life