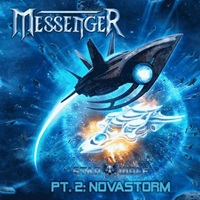 Continuing the space pirate saga from 2013’s previous "The MessengeRs" album, "Starwolf – Part II: Novastorm" from Germany’s Messenger serves up another 10 songs of power/heavy metal. Using a lot of trademark choir elements for certain melodic hooks (‘oh…oh…ah…oh’ during "Privateer’s Hymn" giving another nod to the old school), vocalist Francis Blake straddles the commanding heights of Halford during "Wings of Destiny" while also having a lot of that Teutonic grit that makes Hansi of Blind Guardian charming.

Dynamically the record fluctuates between conventional power numbers such as "Warrior’s Ride" and the title cut where guitarist ‘Chainmaster’ Frank Kettenhofen and fellow rhythm axeman ‘Pyro Jack’ roll out the speed trills in Running Wild/ Gamma Ray similarities against a somber, reflective ballad like "Frozen" that highlights the band’s sensitive side while proving you don’t have to always perform at break neck paces to move people in the genre. Recording at Studio Greywolf elevates the band’s opportunity sonically – incorporating more choir and orchestration parts to give Messenger a fuller aural experience especially with repetition. One of the best aspects of the quintet’s sound is when they ride on that mid-tempo riff hook that put Accept on the map during the 1980’s – "Pleasure Synth" as a result is one of the highlights for me, a track that could have easily appeared on "Metal Heart".

Sure Germany is the homeland for true/power metal – and I doubt those non-believers will be swayed to the other side through taking in "Novastorm". Messenger appeal to the fantasy lover who suspends disbelief and takes the space pirate journey with them. Raise your fists, yell and scream, the battle has begun – another solid effort from these gentlemen.