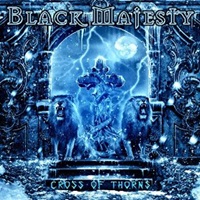 With a new record deal secured through upstart Pride & Joy Music, Australian power metal quintet Black Majesty release their sixth studio album "Cross of Thorns". Always a favorite for their seasoned musicianship, the band know how to intertwine a great mixture of influences from all sides of the globe and make it cohesive.

Black Majesty keep most of the arrangements in the 4-5 minute range, very tight and smart on their part as the ideas never become tiresome or full of extraneous note play. In the middle of the album the group give us their take on the Gary Moore classic "Out in the Fields", much more in line with the original than how Powerwolf tackled the song recently – showcasing a little more of John’s bluesy personality. The energy throughout should pump up adrenaline and blood flow, and favorites include the semi-ballad "Crossroads" as well as the dual air guitar oriented closer "Escape".

Chances are if you are familiar with the band, "Cross of Thorns" becomes a no-brainer to own. Those on the fence or new to Black Majesty, here is a great starter to purchase – and probably will influence you to seek out the back catalog rather quickly.